This Week In Vexillology #208

April 08, 2017
Another week and another consultation of the calendar which gave me the idea for This Week In Vexiollogy- yes, it's International Romani Day, so what better way to mark the occasion than by unpacking the flag of the Romani: 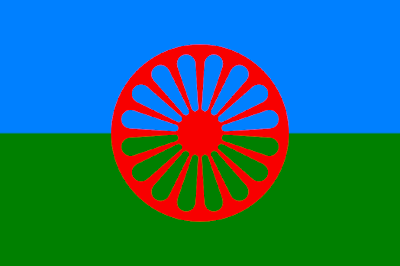 Created by the General Union of the Roma of Romania in 1933, it wasn't adopted internationally until the First World Romani Congress of 1971, which was help in London. (There's a minor split between Western European and Eastern European Romani over the issue- a 1992 Congress help in Latvia agreed on a different flag- retaining the blue and the green but changing out the wheel for a horse head to represent the independence of the ethnic group.)

Breaking down the symbolism of the flag, let's take the official explanation:


The World Romani Congress have adopted a Romani flag which is respected by all the Roma the world over. It comprises of blue and green traditional colors with the red wheel in the center. Blue is the blue sky and the heavens,. Green is the land, organic and growing. The blue symbolizes eternal spiritual values; the green earthly values. The wheel in the center symbolizes movement and progress. It may not be out of place to point out here that the Indian national flag has also got Ashok Chakra in the center.

Even though are up to a million Roma in the United States, I think I can honestly say that I've never met a one of them- I know there's that television show kicking around the place, but that's pretty much the extent of my knowledge, other than what I'm sure is a dubious depiction in the movie Snatch.

A quick Wikipedia glance, however and my mind is sort of blown. The Roma emigrated from India around 1,000 years ago- which isn't, in the grand scheme of things all that long ago- which explains the similarities between their Ashok Chakra's and the one found on the flag of India. What's even wilder is that the evidence they're basing this idea on is mainly linguistic.


More exactly, Romani shares the basic lexicon with Hindi and Punjabi. It shares many phonetic features with Marwari while it's grammar is closest to Bengali.

(That large sound you just heard? It was my mind. Being blown.)

So that's the flag of the Romani People. Remember, until next time- keep your flags flying, FREAK or otherwise!