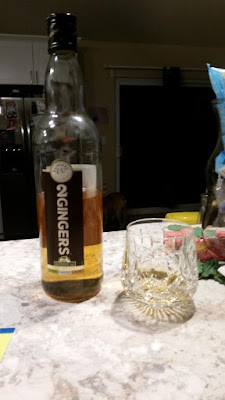 We're back with some Irish whiskey- and to be honest, I can't remember why I purchased this particular bottle of whiskey, but there was a reason. I think perhaps it was for a recipe of some kind that I was working on, but it totally escapes me at the moment. (Or maybe it was just to have a bottle of Irish whiskey in the house for Saint Patrick's Day? Could it have been that simple.)

Anyway, for whatever the reason, I settled on 2 Gingers and it turned out to be a decent buy. I haven't really explored too much of Irish whiskey beyond the usual suspects of Jameson and Bushmills, so it was nice to break out and spread my wings a little bit and try something new.

So what's the deal with 2 Gingers? It's from Minnesota... yeah... that was kind of a puzzlement to me as well. But Minnesota bar owner and businessman Kieran Folliard was inspired by his fiery haired mother and aunt (Mary and Delia) to found 2 Gingers. So it claims Minnesota as it's home, but was founded by an Irish man and made in Ireland...  that's kind of cool, actually. I like that. A Midwest Irish Whiskey. I didn't know such a thing was possible, but I'm happy that I found this out. It gets even more interesting when you dig into the history behind the Kilbeggan Distillery.

Okay, this was confusing and took a little time to unpack, but here's the deal: 2 Gingers is actually brewed at the Cooley Distillery- Kilbeggan is produced their now as well- the original Kilbeggan Distillery is now a museum with a working distillery and restaurant- and the original has roots dating all the way back to 1757 and looks like a great place to visit. (The more Irish whiskey I drink, the more I'd like to go to Ireland. I mean other than the normal amount of wanting to go to Ireland.)

Body: Nice and spicy- which is appropriate, given the name of the whiskey. There's honey and cinnamon with undertones of ginger- which again, also appropriate.

Palate: Sits easily on the tongue- it's not weak and watery but it's also not heavy and syrupy either. It's nice and balanced, The taste is spicy as well, but it's not harsh, it's not burning- it's just the right amount of goodness.

Finish: Warming but not harsh and goes down easy.

Overall: True story- this makes an excellent Irish Coffee and I can't wait to get my hands on some ginger beer and give it a go with that as well. It's not half-bad on the price either and to be honest I dig this. Would buy it again. *** out of ****