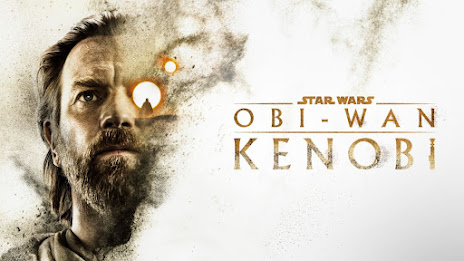 Yes, I've seen all the movies.

I've seen bits of Clone Wars (but not all of it) and the other animated shows.

And after catching up with The Book of Boba Fett and watching Obi-Wan Kenobi, I am convinced of two things: first, for the sake of the Star Wars franchise, they have got to discover other planets in this galaxy of theirs that are far, far away. I'm getting bored with always coming back to Tatooine. Secondly: I'm starting to wonder about the MCU and now I'm really starting to wonder about Star Wars: how much content is too much content? At a certain point, do people stop caring? Or do people wander in and out of the franchise and watch what they like? (Streaming, as a concept, is still fairly newish in the grand scheme of things, so it'll be interesting to see if set viewing patterns emerge or shift as we go forward into a multiplicity of streaming platforms.)

But, Obi-Wan Kenobi: the overall idea works for me. It's obvious from the start of A New Hope that Leia had some kind of prior experience with Obi-Wan Kenobi and this series answers the question of what exactly it was. No problem there and as a plot, it works really well.

The show opens about ten years after the events of Revenge of the Sith. Order 66 has been executed and the Jedi- with few exceptions are no more. Obi-Wan Kenobi (Ewan McGregor) is in exile on Tatooine, watching over the young Luke Skywalker. He's not the Obi-Wan we knew or come to know in either trilogy. He's traumatized, bruised, and a little broken. However, when Princess Leia is kidnapped by forces unknown, a visit from Bail Organa (Jimmy Smits) brings Kenobi out of exile to track her down.

This turns out to be the spark needed to gradually bring Kenobi back to himself. He discovers the state of the galaxy and it's not that great. He encounters a con-man, Haja Estree (Kumail Nanjiani) who is pretending to be a Jedi and finds out that there's a bounty on his head that attracts the attention of bounty hunters and the Empires Inquisitors- including the Grand Inquisitor (Rupert Friend), Fifth Brother (Sung Kang) and Reva (Moses Ingram), who appears to have something an obsession with Obi-Wan and she reveals something he doesn't know: Vader is alive.

Now alerted to Obi-Wan's re-emergence, Vader brings the Empire's forces to bear on finding him with a vengeance. Obi-Wan and Leia flee Daiyu for the mining planet Mapuzo, where they make contact with a nascent dissident network that gets Jedi survivors to safety- the empire- Reva, and Vader included catch up with them there and in their first encounter since Revenge of the Sith, Vader gets the better of Kenobi, burning him badly.  The dissidents help him escape, but Leia is captured.

Against all odds, Kenobi has to use the dissident network to find Leia and get her out safely-- which he succeeds at, which almost causes Vader to kill Reva until she reveals she placed a tracker on Leia's droid companion, Lola. Kenobi realizes this and separates from his allies to lure Vader into a duel. This time, he's got his mojo back and he incapacitates Vader by breaking open his helmet and, realizing that his friend, Anakin is now fully gone, leaves him.

After one final (spoiler-y) showdown with Reva (back on yes, everyone's favorite planet/plot device Tatooine) Leia is returned safely to her parents, and Obi-Wan, his connection to the Force re-established, hope (at least somewhat) restored, vanishes into the desert.

Overall: I don't know how to feel about Obi-Wan. The ending was perfect, it was good to see Ewan MacGregor in the role again-- this time a little older, a little more bruised and battered and frayed around the edges, he portrayed it perfectly. I wish we would have seen more of Alderaan and less of Tattooine. More Haja Estree, (Kumail Nanjiani steals just about every scene he's in- seriously good work and an interesting character too.) I don't understand the hatred Moses Ingram got: Reva wasn't perhaps the most iconic villain I've ever seen, but she was genuinely good. The scenes with Vader worked. There's a lot to like here, but... I can't help but feel I've seen a lot of it before. So, My Grade: *** out of ****

The Book of Boba Fett spins off from The Mandalorian to explore the life and times of Star Wars' original and best bounty hunter, Boba Fett. (Temuera Morrison) It is, once again, inevitably, set on Tattooine, but that's actually okay here. Where the show begins is where The Mandalorian leaves off: Boba Fett assuming the throne in Jabba's palace and taking over for him. In between consolidating his power (getting new allies, buying off local gangs, getting some muscle for a confrontation first with the Hutts-- twins, who come calling for Jabba's old territory and then the Pykes, who have power and muscle to take the whole planet, we get flashbacks to see just what happened to Boba Fett.

He frees himself from the Sarlacc pit and then finds himself a captive of the Tusken raiders. Eventually, he rises up through the ranks to become a member of their tribe and then hunts down his armor (as we see in The Mandalorian) and meets Fennec Shand (Ming-Na Wen) before catching back up to the present where he has to call upon Mando (Pedro Pascal), Cobb Vanth (Timothy Olyphant) along with frankly bad-ass Wookie bounty hunter Krrstantan (Carey Jones). There's also a slight plot detour, presumably to set up the next season of The Mandalorian which sees some spoiler-y developments including a return of the characters you would expect.

Robert Rodriguez directed a few episodes, so Danny Trejo pops up as a rancor breeder (in a cool little twist that gives what has been merely Jabba's pet monster in The Return of the Jedi a little bit of... character development?)

Overall, it's original enough that I can ignore the fact that we are, yet again, on Tattooine- everyone's favorite planet/plot device in the Star Wars universe. Boba Fett is an interesting character, I like Fennec Shand too and it's all... intriguing. I want to see where this goes. If there's a weak point, it might be the random deviation to catch up with characters from The Mandalorian. I know it's so they can set up the next season of that show, but it's jarring and unexpected and feels a little unnecessary- but The Mandalorian has been so good that I'm willing to see if this pays off somehow. (I'm betting it does.)

The Tattooine of it all feels annoying, but the wretched hive of scum and villainy (though technically I think this is Mos Espa and not Mos Eisley) more than makes up for yet another trip to the desert planet with it's twin suns. I would hope that any subsequent seasons would feel more about these characters and the story of Boba Fett and leave The Mandalorian to it's own devices, but for a debut season, the story was interesting, engaging and brought Boba Fett a little more to life and I'm okay with that. My Grade: *** 1/2 out of ****