Guy Gavriel Kay is rapidly becoming one of my favorite authors. Under Heaven is only the second 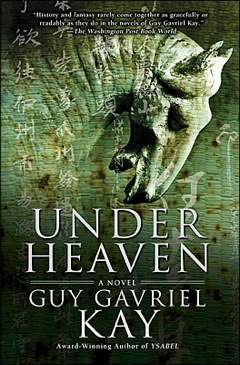 book of his I've ever read and I went into it knowing nothing at all about what I was going to read and I left honestly sad that it had ended. Kay is an author whose books will sit with you for a very long time, but in a good way- a very good way.

Under Heaven is set in a fictionalized China that roughly corresponds to the Tang era. Right off the bat, I don't know that much about ancient Chinese history, so I can't tell you how well he captures that era of China's long history, but given the care that you can see Kay put into constructing the characters that inhabit this world, I'm going to go out on a limb and say that he probably did a good job. He doesn't seem like the type who is going to skimp on his research.

Anyway: when the story opens, Shen Tai, the second son of a renowned general of Kitai (what we're calling the fictionalized China) has been living at the site of his father's famous battle in far western Kitai at Kuala Nor. He came there after the death of his father (and, as it turned out after his heart had been broken by a woman, but we don't know that at the outset) to bury the dead Kitan and Taguran soldiers. He's been fairly cut off from the world, unaware that his simple decision to give peace to the ghosts whose cries can be heard across the battlefield at night by burying them has caught the attention of the Kitan Empress of the neighboring Taguran Empire. (Shen Tai, you see, isn't just burying Kitan soldiers, he's burying Taguran soldiers as well.) She sends him a gift: 250 prized Sardian horse that ends Shen Tai's solitude and threaten to engulf him in the political struggles of Kitai's ruling dynasty.

He befriends one of the Taguran officers who bring him this news and offers him some excellent advice, make a condition that only he can collect the horses in person-- this would prevent anyone from killing him and claiming the horses for their own and also makes him instantly powerful in the political machinations of Kitai. Knowing that he has to return- his return is further complicated when an old friend, Chou Yan arrives with news of Tai's sister, but is assassinated before he can reveal what it is.

Plunging back into Kitai, Tai is swept up in the politics of the Emperor's court in Xinan. He founds out the fate of his sister- elevated to royalty and sent north to marry the Chief of the Bogu barbarians that roam the steppes. Her escape from that fate and return to Kitai is tied to her brother as well and her story parallels his in the back half of the book.

In the capital of Kitai, the great city of Xinan, Shen Tai learns that everyone who is anyone in the court wants the horses- that included military governors of the provinces he passes through as well as Wen Jian, the Precious Consort and current beloved in the Emperor Taizu and the General An Li, the powerful general the court is afraid of, holding him close to the Emperor and the rest of the court, worried about what he could gain in the provinces if he is allowed to gather power for himself. (Turns out, this is a valid worry, as General An Li launches a rebellion at the climax of the novel.) Eventually (and I'm trying to make this as non-spoiler-y as possible, because this is a book you def should go and read) all the characters are swept up in the course of history and events beyond their control.

The writing is beautiful. I don't know of any other way to describe it-- but Kay imbues this whole book with this kind of beautiful melancholy that's just gorgeous. And whether his use of poetry and poets is just a nice aspect of the Tang dynasty that I am unfamiliar with, that works really well here too. Sima Zian (the poet known as 'The Banished Immortal') is one of my favorite characters in this book. The quiet heartbreaks stand out especially for the character of Spring Rain, Shen Tai's former lover-- who comes so close to reuniting with him at the end of the book, but in the chaos of war, there are no neat and tidy endings-- she goes back home to her homeland, gets married moves on and writes him one last letter- which never reaches him. Similarly, the fate of Wen Jian, trapped by her own power and suffering a fate, not of a grand death, but a smaller, more unexpected one that's still strangely beautiful in its way.

Overall: Another beautiful book from Guy Gavriel Kay- every time I read one of his novels, I'm always left wanting more. I'm always telling myself that I should read more of his books and then I never do for a couple of years until I pick up another one, when I'm blown away by the beautiful writing, the gorgeous prose and the worlds his novels inhabit. My Grade: **** out of ****