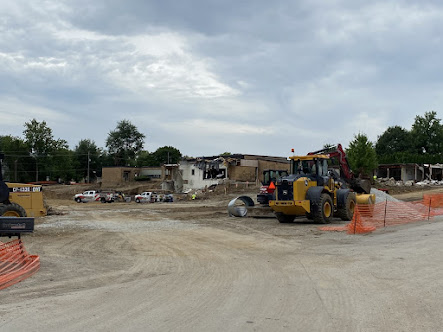 Living where we live, there's always been a soundtrack to our house. Summer brings softballs, fouled out right over our fence and into our yard for the dogs to collect. Fall, there are Friday night lights, the cheers of the crowd. Spring there are the shout and the echo of starter pistols from track meets. Late July and early August you get the start of two-a-days for the football team, voices in unison, shouting out numbers of jumping jacks. August, the marching band begins and there's a week or two of trying to figure out what this year's theme is before it all actually clicks.

This past week or so, the soundtrack has been different. Jackhammers, clanks and crashing, rubble shifting, things slamming so hard the windows shake. The sounds of destruction behind a screen of shrubs or trees that the school district planted as a privacy screen years before.

Hoover Elementary is slowly being torn down.

What's going in its place hasn't been made super clear yet-- I'm hearing it's tennis courts and a parking lot, which might annoy some people for a while, but if the new parking lot (I'm guessing) is directly south of Bates Field that will get a lot of cars off of the roads and into a parking lot and I'm willing to bet the neighbors will be happy with that. The ending was probably inevitable. They tried to delay it- even going so far as to take it all the way to the State Supreme Court, but to no avail. The school district built a shiny new Hoover on the east side of town and its operations are already underway.

Unsurprisingly, there's not a database of elementary schools and who they're named after out there on the internet- at least not one I could find doing a very basic Google search-- but I found seven that showed up in Iowa. One in Council Bluffs, Mason City, Cedar Rapids, Dubuque, Bettendorf, and Iowa City  (this doesn't include middle or high schools). This particular Hoover, being jackhammered into dust, was one of the few dedicated by the man himself, back in the day. (I wish I could find that particular article in the Gazette, but it seems to have escaped my search engine algorithm grasp, at least for now. I might keep checking.) They kept the original door handles too- I remember seeing those the few times I was in the school.

It's hard to be sentimental about a school you yourself didn't go to but the sledding hill was carved up
last week and that was a real shot to the gut. Lots of good memories on that hill- not just from my own childhood, but from the early days of having my own kids. That was the first hill they went sledding down. I recall taking the Eldest Kiddo down there in a snowstorm after dinner one night. He was so excited and I let him sled until he was covered in snow and frozen to the bone. 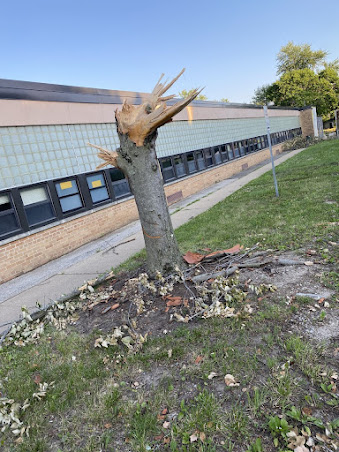 We've bounced around a bit in Iowa City-- the Eldest Kiddo went to preschool at Hoover, and kindergarten at Alexander before bouncing back for First Grade at Hoover. Thankfully, the boundaries don't seem to be shifting anytime soon, so he'll be finishing the rest of elementary school at Longfellow- but he was in the last class of first graders at the old Hoover Elementary. The convenience of that year... y'all. I'm not gonna lie, I miss that. He could walk home by himself.

(I'll admit to something: there have been two times that I have forgotten it was Thursday and thus, early out day and have had to, shall we say, scramble to go pick up the poor Middle Spawn, but that would not have been an issue had Hoover remained our school. Another reason, however trivial to lament its loss.)

Progress is inevitable, I suppose. I've been trying to catch up on Stranger Things lately and Season 3 was an interesting reminder that my children will never experience the shopping mall at the height of its power. The anti-smoking campaigns of the 90s have been so effective they might not even know what a cigarette is. As someone that got to experience life prior to 9/11 and after 9/11, the World Trade Center jumps out at me in every television show or movie I see it in. VCRs, laserdiscs, landlines, rotary phones, pay phones, telegrams (not the app, but the actual things you'd send via Western Union or whatever). It's a weird experience, being a Xenniel, a geriatric Millenial, a corpse-like-dead-zombie millennial, or whatever we're called now. What we really are: the last analog generation, the first digital one. Two things at the same time and the landscape is always shifting and changing under our feet.

Sometimes it's little things, that catch you by surprise. Sometimes, it's driving the streets of your hometown, like muscle memory, little neurons in your brain, you could do it in your sleep, you know when the landscape is right and when it's wrong. The playground went first. Then the basketball courts. Then the garden, the stairs- that was such a cool playground back in the day-- even in the present day, it wasn't bad, when the metal and plastic and rounded corners replaced wood and gravel. Now the building itself is getting torn down. The landscape is changing. The hill is gone, looks like a retaining wall is planned for its place- though again, who knows what's going to replace it.

It'll be a mark on the back of my brain: there used to be an elementary school there. You could hear the recess bell and the sounds of hundreds of children playing during the day. Progress is inevitable. The soundtrack changes. Tracks come, tracks go.