I never thought it would actually happen. There were too many horror stories about people having the rug pulled out from underneath them at the last minute. Of being told they didn't have the right loans or they had done something wrong or failed to submit this certification or that. I was pretty convinced I was doing everything right, but I never wanted to believe. I never wanted to get excited. I wanted to treat this like winning the lottery: it'll be nice if it happens, but I ain't going to believe it until I see it.

Well, guess what? It finally happened: 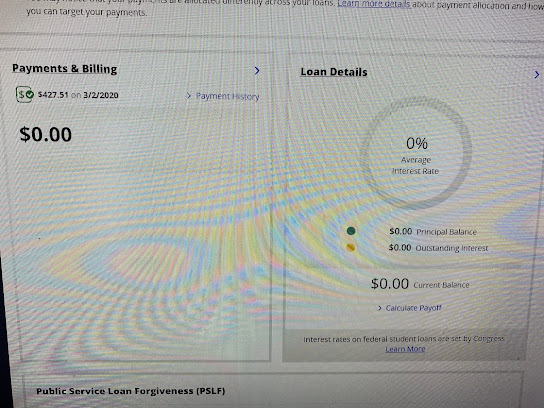 It's kind of a weird feeling, looking at the screenshot even now. It wasn't a herculean feat of human achievement. I just filled out the appropriate forms and stayed at my job for the requisite time period. I also know that I'm coming at this from a place of relatively mild privilege. My loans paid for two degrees and a lot of dumbass financial management in my twenties. There are people who are carrying way more student loans than I am- just for a single degree. I hope they can benefit from relief like this as well. Hell, I hope everyone can.

Zooming out from this vantage point, you have to consider the larger picture as it relates to student loan debt and higher education. Is it a drag on the economy? Yes. I think my generation was sold a bill of goods to be quite frank because the 90s were a ridiculous time when you could major in video games and bullshit and still get a halfway decent job doing something. College costs have far outpaced inflation and I think it's gone from being a public good to a luxury good which is a massive problem. You can try and sell people on the line that 'college is good for everyone' but I don't think people are buying that anymore. College isn't good for everyone- it's good for a lot of people and can provide unparalleled opportunities for people, but it's no longer the mass public good it was in the mid-to-late 20th Century.

How do you fix that? I have no idea, but while I can appreciate the calls for student debt cancellation, if you're going to do something that big, you've got to do it once. I am in favor (obviously) of things like Public Service Loan Forgiveness. I think schools should be on the hook for a percentage of loans that get defaulted on. I think you should be able to discharge this debt through bankruptcy because it's psychotic that you can't. In general, I think if you're going to have 18-year-olds take on a massive financial obligation that they don't fully grasp- and don't try and tell me that they do because I sure as fuck didn't at the time- then the entire student loan system needs to be set up to protect them and not the schools or the loan companies. As currently constructed, all the power and advantages are on the wrong side of the equation- at a bare minimum, that should change.

All of these questions will undoubtedly be wrangled about by policymakers and politicians who get paid a lot more than I do. Regardless of what happens, I'm going to celebrate this. It finally happened. A burden has been lifted and our debt load just decreased substantially. It wasn't how I expected to start the year, but you know what? I'll take it.