Squawk Box: The Great/Never Have I Ever 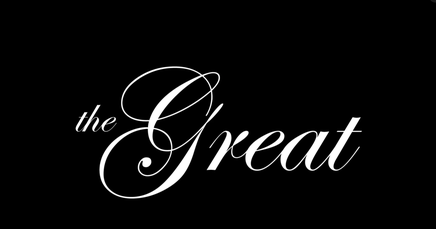 Catherine The Great seems to have popped up in popular culture now and again in the pat few years. HBO had a miniseries starring Helen Mirren that looked good, but obviously, I don't have HBO and didn't watch it- but then along came Hulu with The Great. The previews looked amusing enough. Elle Fanning stars as Catherine The Great and Nicholas Hoult stars as her husband Peter III of Russia- seemed like it was worth a shot and you know what? It was actually really, really good.

The first season focuses on Catherine's arrival in Russia and her realization that her husband is kind of a terrible Tsar and deciding to seize the throne for herself. When she arrives, she's very naive about the way things work at court in Russia- but her maid, Marial (Phoebe Fox) soon realizes that Catherine could be her way back to prominence after the actions of her aristocratic father see her demoted. Marial educates Catherine about how court works- telling her how to manage the ladies of court, who freeze her out as Peter's mistress, Georgina Dymova (Charity Wakefield) sees her as a threat. Along the way, Catherine meets Orlo (Sacha Dhawan) who shares her interest in advancing Russia and bring things like art, science and literature to the court. The Patriarch of the Church, Archie (Adam Godley) opposes Catherine- but also comes to see her as an important ally as well.

Locked in a war with Sweden that's costing them blood and money and frustrated at Peter's lack of interest in anything modern, Catherine soon begins to gather allies and plot to seize the throne for herself. By the end of the first season, her coup is finally in motion and she is faced with an impossible choice: to decide whether she loves Russia more than her lover (generously hand-picked for her by Peter). In the end, she chooses Russia.

At ten episodes, The Great moves fairly quickly. I'd say you could binge in over a long weekend if you're really into it. It makes no bones about it's historical accuracy-- "loosely" based would work best here- so if you're grading for accuracy, go dig up the HBO series. If anything the overall tone of the series reminded me of Sofia Coppola's movie Marie Antoinette. My Grade: *** out of ****

I had seen Never Have I Ever arrive on Netflix, but I hadn't actually bothered watching it until the Missus and I were in between shows and we decided to give it a go.  Turns out, that was the correct move- because with Mindy Kaling as executive producer, you know the comedy is going to be sharp- and even better: this is a teen coming of age drama focusing on an Indian-American family, which is a watershed moment for South Asian representation in our culture- but it's also happens to be entertaining as well and funny to boot.

The show opens as Devi (Maitreyi Ramakrishnan) is starting her sophomore year. Her freshman year wasn't so great-- her Dad died, she was paralyzed for awhile and no one really knew why- so she's really hoping she can get her friends Eleanor (Ramona Young) and Fabiola (Lee Rodriguez) on board with the idea of getting boyfriends and doing that most typical of teenage pursuits in shows like these: getting laid.

In Devi's case, she's looking to land her crush, Paxton Hall-Yoshida (Darren Barnet.) She's also back to battling her nemesis in all things smart and overachieving, Ben Gross (Jaren Lewison) with whom she has a not-so-friendly rivalry. At home, the anniversary of her Dad, Mohan's (Sendhil Ramamurthy) death approaches, Devi is struggling to process her emotions about it. Her Mom is setting up her cousin, Kamala (Richa Moorjani) on a date with a potential future husband. (Kamala is staying with the family to complete her PhD at Cal Tech and already has a boyfriend- but has to struggle with the cultural expectations of a potentially arranged marriage.) Things between Devi and her mother, Nalini (Poorna Jagannathan) aren't that great either- partially because Devi's a teenager and partially because both of them are still wrestling with their respective grief at the death of Mohan.

After many twists and turns, Devi, her mother and cousin do spread her Dad's ashes in the ocean and Mother and Daughter are united in their grief and things are, at least for the moment, peaceful.

Smart, funny and narrated by none other than tennis icon John McEnroe, which is surprisingly charming left-field choice for narrator, Never Have I Ever, at ten episodes is a fast watch. You could get through it in a weekend, easy-- or even a day if you're really bored. My Grade: **** out of ****.