In A Weird Way, Steve Forbes Had A Point 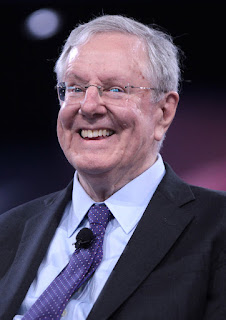 I'm sure if you're a young Conservative hipster type who thinks that the current flavor of Bannon/Trump/Stone conservatism is just so passe and that the real cool flavor of conservatism is to be found in the mid to late 90s when such titans as Jack Kemp and this guy hung out then you know exactly who this dude is.

If you're not a Conservative hipster type, allow me to enlighten you: it's Steve Forbes, everybody! Yeah, you know Forbes magazine? That Forbes. And he ran for President a couple of times and his big, signature issue was, of course, the flat tax. Now, in the wake of our current President's tax information being breathlessly splashed around the internet, a thought occurred to me: in a weird way, Steve Forbes had a point.

Not necessarily about the flat tax- though we can argue about that if you want- Forbes thought your taxes should be big enough to fit on the back of a postcard and that doesn't seem like the worst idea in the world right now.

It's not that I'm particularly aghast at the President's lack of tax-paying. It illustrates a fundamental problem with the tax code: it's so convoluted and complex that only the rich can afford the accountants and tax attorneys that enable them to game the system and move their money or lack thereof around to avoid paying anything at all. That's the real scandal in all this- not that the President didn't pay much of anything in taxes for the past two decades: it's that his behavior is all perfectly legal.*

So, not only does the tax system inherently favor the rich and the better connected at the expense of the poor and middle class- but it gets worse! Turns out the IRS audits poor people more than rich people! So if you're not upper class enough to afford accountants and tax attorneys in all likelihood you're getting hosed by the system. Much of the history of modern conservatism in this country has been centered around taxes and tax revolts because people don't want to get hosed by the government- so either they're being sold a bill of goods about taxes (likely) or they just know that the rich are going to game the system anyway and they want in on that action. (Less likely, but still plausible.)

Meanwhile, it seems like a lot of the rhetoric on the left is eager to blame the rich for 'not paying their fair share' which is just borderline cringe at this point and traps the left in the tiresome argument about being the party that wants to raise your taxes, etc, etc, But how in the hell can you call a system this complex progressive in any way, shape or form?

To me, the big policy meat to grab for isn't raising taxes on the rich, it's redesigning the tax system. You strip the complexity out of the system however you can-- and while I don't think the Democrats are going to boil down the tax code to a postcard, a regular 8.5x11 sheet of paper seems reasonable. Rich people and corporations can get away with wholesale tax avoidance because the system is complicated enough to allow them to do so. If you make a system so simple that either a. no one can game it or b. everyone can game it to a certain degree, we might be surprised at how much tax revenue we end up with.

(Oh and hey, remember all that Russiagate screeching we were subjected too? Turns out there's no evidence of Russian money/debts or previously unreported connections there. So good times, everyone, good times! Thanks, media!)

There are some takes about the President's taxes out there that I disagree with: namely that no one cared four years ago, so why should they care now? I think that might be right for a lot of the President's hardcore supporters, the broad morass of the American public might take a different view now. Ten years ago, you could argue broadly in the favor of the traditional explanation of the 'American dream' and some people might agree with you- but today? Between Occupy Wall Street, the Tea Party, Black Lives Matter, the College Admissions Scandal, and now this- people are quite aware of the bullshit inherent in the system. They're all symptoms of the same and growing problem- one that cuts across party lines in a way that I don't think the Political Establishment has quite grasped yet: people aren't believing what they're told anymore. People aren't going to settle for half-a-loaf anymore. People expect a fair shake and are waking up to the fact that the Establishment is largely out for itself at this point and if the peasants out in the boonies get a crumb or two of a tax credit or a policy initiative flung their way to keep them quiescent, they should be grateful.

Except they're not grateful. They're increasingly pissed off.

Reforming the tax code seems like the recipe for a massive headache and/or developing a drinking problem to me, but if one of our two turgid political parties takes it on and (this is the hard part) does it well, they could reap more electoral benefits from voters than they might think.

Do I think this will happen? I don't. Primarily because Congress is full of rich people who rely on other rich people to get them elected. (Not to mention the fact that both parties fiddle with the tax code to promote policies and change voter behavior- which would be a hard habit to break.) But it's just nice to think that after all these years, a policy gimmick that most people thought was goofy as all get out at the time doesn't seem like the worst idea in the world right now.

So yeah, in a weird way, Steve Forbes had a point.

*See, it's not just me! Larry Correia used to be a CPA and even he gets at it. If the system is designed to give you loopholes to promote tax avoidance, why the hell wouldn't you use them? We all would.