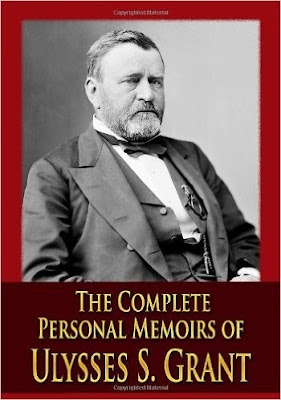 I'm not a huge Civil War buff, but General Ulysses S. Grant has become increasingly fascinating to me. Reading about the western campaigns and the Army of the Tennessee prior to my visit to Shiloh with The Quiet Man opened up a whole new aspect of the Civil War to me. There's an anecdote about the Battle of Shiloh that stuck out to me- after the first night, Sherman found Grant leaning up against the tree, trying to stay out of the rain and said something like, "Well, we've had the devil's own day, haven't we sir."

The tree isn't there anymore, but they've got a marker to commemorate the spot. (I also found out that Old Crow- while probably not the original recipe that Grant preferred was, in fact, the brand he liked- and as bottom shelf bourbons go, it's actually pretty solid.)

Anyway: finding that not one, but two volumes of his Personal Memoirs were available for free on Kindle, it seemed like a pretty easy sell to snag them both and give them a read. But even before I got into reading them, I learned the story behind them. By the end of his life, dying of cancer, Grant was not in good financial shape and wanted to make sure that he left his wife enough to live on. Mark Twain of all people made him an offer for his memoirs with not a 10% royalty as Century magazine had offered him, but a 75% royalty- which was unheard of at the time. It ultimately netted Mrs. Grant about a half a million dollars which is about twelve million dollars or so in today's money- and it was a commercial and critical success to boot.

And it's easy to see why it was such a commercial and critical success. I think there's a certain amount of ego that can enter into Memoirs that can make the writers of them somewhat verbose-- Churchill definitely suffers from this problem, but happily, Grant does not. His style isn't exactly spare- he's blunt with criticism and effusive with praise of subordinates and superiors on the Union side of the conflict and equally so with his opponents on the Confederate side. The Memoirs start by sketching out his early life and childhood to his days at West Point and his service in the Mexican War- where he actually interacts with many of the commanders and future commanders that prove to be critical in the Civil War.

Grant isn't super enthused by the Mexican War- primarily because the politicians kept getting in the way of a lot of military decisions and prolonging the conflict- or at the very least, making the ultimate aim of the conflict and how to end it somewhat unclear. (It's both comforting and disheartening to realize that in America, some things never change.)  But, he comes out of that with some military experience and heads back to Galena and married life and farming until the Civil War kicks off.

First, he's drawn back to raise men for the state militia of Illinois. But he proves himself to be a capable commander and quickly rises through the ranks to become a General. He takes the reader through the western campaigns: Shiloh and down to Vicksburg and then into the interior of Mississppi and up into Tennessee for the Battle of Chattanooga. Most of this part of the book I had delved into before- but hearing it from Grant's point of view provided an interesting point of view.

Where we got into new territory was when Grant went east to take command of the Army of the Potomac. The whole Wilderness Campaign was more or less new to me- and I had no idea of the painfully slow progress the Union armies made across Virginia. Didn't know about the calvary campaign down the Shennandoah Valley. Didn't know about the struggle to capture Richmond and the final frantic flight of the Confederacy until the end finally comes at Appomatox (The topography of Virginia was a surprise too: so many rivers!)

Overall: This is a well-written, readable, pimary source worth reading if you're into the Civil War or just looking to lean more about it. If I have a minor quibble, it would be the appendix at the end of well, what would be Volume II- but is really just the end of the book- it's essentially a long official report of everything Grant just finished telling us about in the book, plus a few more official documents. Other than that, though, this is a great, solid read for any history buff. My Grade: **** out of ****