One Hell Of A Week 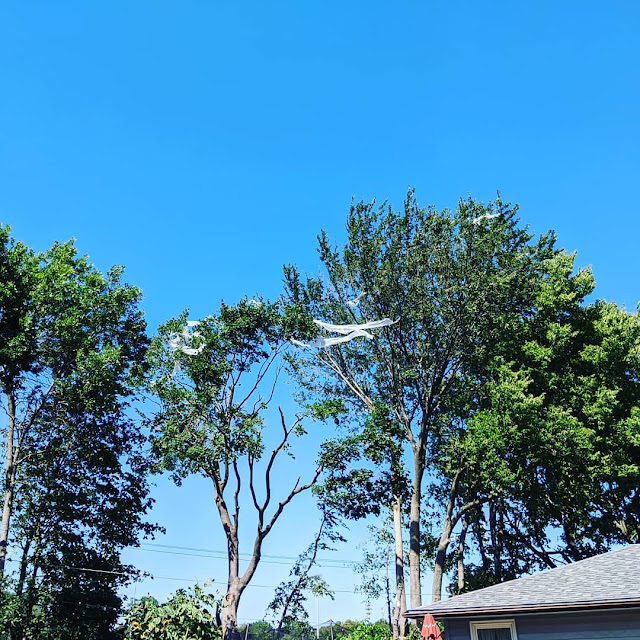 All things considered, I think we got pretty lucky.

I saw first indications of something heading our way about mid-morning last Monday, the weather service deemed it as a line of severe thunderstorms, so I didn't think about it much and just made a mental note to keep an eye on the weather and see what happens. I was planning to load the kiddos up and head over to the school to grab some lunches for them around noon- but the sound of tornado sirens going off quickly put paid to that idea, so I had to do what every good parent does when confronted with an unexpected change of menu item: I made macaroni and cheese.

By the time the mac and cheese had been made, I could see the clouds starting to move in, so once the kids had been dished up their lunch, I scraped the rest into a bowl and stepped outside to watch the storm come in.

At this point, I still didn't know what exactly we were dealing with-- it was, as far as I knew, a Severe Thunderstorm Warning- and as a longtime resident of the Midwest, when a storm is coming in, what do you do? You got out and watch it. You ususally have a few minutes before the rain starts, the wind picks up or the lightning gets too close. Not this time, however.

The wind didn't pick up gradually, it slammed into us like a breaking wave. That's probably the best way I could think of to describe it. One second nothing, the next second all hell had broken loose. Chairs were toppling, the inflatable pool went airborne and I assumed it was heading for the roof, if not parts unknown and the Eldest Spawn came running to tell me we had lost power.

We rode out the storm in the basement and ended up with half a tree and a downed line in the backyard. Incredibly- given how close our house is to an awful lot of mature trees, we didn't end up with anything landing on the house. The trampoline- which I was half expecting to be flipped over and crumpled, didn't appear to move an inch. The new tree we just planted in the front yard- also just fine.

Granted, we didn't get power back until Thursday night and I didn't realize how bad things were up in Linn County the first night, which made my quest for gasoline to fill up our van very frustrating indeed. (Said quest took me to six gas stations where I decided that pull in pumps are insanely stupid when compared to pull thru ones, I did text the wife to check to see if the President had started bombing someone because I honestly hadn't seen gas lines like that since 9/11.) My quest for gasoline ended in a pitch black cul-de-sac in Manville Heights where I had to execute a three point turn and threw in my towel for the evening.*

It was a massive and unanticipated disruption to the week, but we made it through. We're back home. We're together. We have power. We have internet. We got most of the storm debris squared away.

A week later and a lot of Linn County is still a mess-- thanks to the tireless and vocal efforts of local news sources up there (Beth Malicki from KCRG has been taking no prisoners and absolutely no bullshit from anyone on Twitter about this) the story has finally gotten some national traction. Local officials and the Governor have gotten their act together. Federal aid is forthcoming, as is apparently the President himself. So things should start to get better in a hurry-- but the real question and the real story is probably why it took a week to get the ball rolling on some of this stuff.

State and local officials did a pointing Spider-Man meme at one another ("no, we were waiting for you to call")- which while technically is probably correct when it comes to the process (local officials request state aid, state requests Federal, etc)- it ignores the rather salient point that cell service was for shit- and if it was sketch in Johnson County, it must have been well nigh non-existent in Linn County in the immediate aftermath of the storm. It also ignore the old pokey-pokey, wherein state officials (or federal officials) gentle poke the rung below them and say, "hey, this looks bad. You want help, right? Right?" But apparently that didn't happen either.

So, the government didn't exactly cover itself in glory here- but momentum is growing and some actual real-life help for the army of volunteers in Cedar Rapids should be forthcoming.

Really, apart from the obvious heroes** (linemen, neighbors helping neighbors and the army of volunteers that rolled up their sleeves and descended on Cedar Rapids to help) I'm going to have to shout-out the local media on the ground throughout the state and region. There was a literal news blackout about this (the cynic in me is convinced that the national media didn't want a natural disaster stepping on Biden's VP roll-out- which combined with the fact that when there's not a caucus here, we're just one of many flyover states national media types tend to ignore) and it's thanks to their efforts essentially shouting at the tops of their lungs that "oh hey, there's a major news story here because an entire city was shish-kabbobed by a derecho" that I think we're seeing momentum on aid and resources start to arrive in the region in a major way.

I confess, I did not have land hurricane/derecho on my 2020 bingo card- but damn, I'll be glad to see the back of this year. Hope everyone has made it through okay and if you don't yet have power, may it come on soon!

*The next day's challenge involved getting food for the kids which involved trips to three separate McDonald's throughout the area, before finally deciding that no, this was the winner, no matter what and navigating through a hellish turn lane, fighting through everyone in a three county radius trying to get into a gas station only to pull up to the drive through and be told, "oh, we're only taking cash right now." (We scraped together enough cash to get enough dollar menu items to satiate the children.)

**Can't say enough good things about Advanced Electric. Called about the low-hanging power line in the back yard and was told it'd be 2-3 days and we were on a waitlist. Got a call the next day and it was fixed by that afternoon-- textbook example on how to underpromise and overdeliver. Plus the power line looks great!