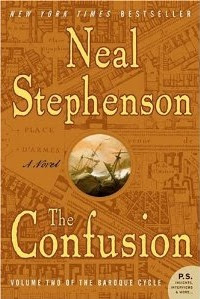 I don't know if the same rules apply to books as they do to movies, but I feel like there's got to be a fairly similar crossover when it comes to sequels. Ones that improve on their predecessors are rare indeed- and happily for Neal Stephenson, book two of his Baroque Cycle, The Confusion is an incredible improvement on it's predecessor Quicksilver.

First, there's the structure of it: The Confusion actually is very well organized- its actually two novels Bonanza and The Juncto that are intertwined with one another and while you think that might be confusing, the two stories actually dance around each other and come closer and closer until by the end of the book, they tie together in a perfect knot.

Bonanza tels the story of what happened to Jack Shaftoe. In Quicksilver, we leave him tied to an oar, a galley slave, sinking deeper into is syphilis. Three years later, he manages to catch a fever strong enough to sweat the disease out of him and restore him to his sanity. His shipmates during that time have pieced together a plan: they wanted to capture silver illegally shipped from Central America by a Spanish envoy. They convince the Pasha of Algiers to sponsor their heist in exchange for their freedom and a cut of the profits. They pull of the heist, but instead of silver, they find gold. They flee Spain and head to cairo where they plan to hand over the gold. They meet with Duc d'Arcachon- who is after Jack, who ruined a party in the first book and whom Eliza wants to kill for being the man responsible for enslaving her.

In Cairo, Jack cuts off the head of the Duc and declares he's doing it for a lover. The Cabal escapes and heads for India, but is waylaid and scattered by pirates. A year later and Jack gets the band back together to fight their way through to the Emperor's capital and is rewarded with a temporary Kingship in south India for his troubles. Three years later and the Cabal has built a boat made out of durable teak wood and they make a series of deals to trade their way back around the world-- first with watered steel to Japan and then picking up a cargo of mercury and getting shown the secret way across the Pacific by a Spanish galleon so they can sell their quicksilver in the silver mines of the New World and then, the get silver and around the Atlantic side of the New World and get invited back to Eliza's home in Qwghlm.

The Juncto, recounts what Eliza has been up to in all of this. Her role as a double agent for William of Orange (in the previous book) is revealed and under blackmail from d'Avaux, Eliza is forced to loan her vast fortune to support the King's war efforts. Forced to return to court life, she finds out that the duc d'Arcachon was the man who enslaved her  and begins plotting to kill him only to find out that Jack has killed him instead-- and before her relationship with Jack can be revealed she married Etienne the son of the Duke and becomes Duchess of d'Arcachon. Her illegitimate child with her lover, Rossignol is kidnapped by the banker, Lother von Hacklheber, so naturally, denied revenge on d'Arcachon, she sets her sets on Hacklheber and conspires to bring him to his knees.

Meanwhile Bob Shaftoe is still kicking around, working as a soldier, first fighting in Ireland and then ending up in the Netherlands, where he finally liberates the white slave, Abigail Frome that he's loved for years. The rest of the book tracks the lives of the main characters across the next ten years. Waterhouse confronts Newton over his unstable behavior and gets him to take a job as director of the Mint working for the newly created Bank of England. Eliza survives smallpox. Princess Eleanor's daughter, Caroline is adopted by the new Queen of Prussia sophia Charlotte where she forms a friendship with Leibniz.

Everything comes back together when Jack and company arrive on Qwghlm only to step into a trap set by Etienne who wants revenge on Jack for the death of his father and being Eliza's lover. The King of France, Louis XIV however frees him- he finds out there's a traitor amongst the Cabal, who soon redeems himself by shooting Etienne dead and then killing himself to protect his family before Jack and Eliza are separated- perhaps forever and Jack is sent to London with orders to sack the Tower of London and debase England's coinage to cripple their economy.

Overall, I would pronounce this a wonderful sequel to Quicksilver. There's less focus on Daniel Waterhouse in this one and, as a result, we don't wander off into deep discussions of natural philosophy and science and calculus all that much. Keeping the focus on Jack especially creates a rip-roaring globe trotting adventure that really communicates just how big the world was back then and how small it's become now- though that might be to it's detriment these days. Stephenson's humor is dry and his wit delightful and The Confusion is an adventure in every sense of the word. We'll have to see if the third book in the trilogy can bring it home to a satisfactory end. My Grade: **** out of ****