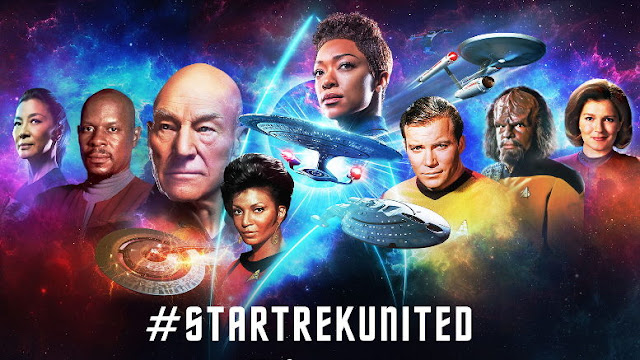 Apparently, the new President of Paramount is trying to figure out what to do with the Star Trek movie franchise. There's more Trek on TV than ever before- (Lower Decks has a lot of promise, I think- I genuinely enjoyed the first episode!) so that naturally means that they want to take advantage of that somehow and get the movie side of things going again. I'm sure every Trekker out there probably has a laundry list of suggestions a mile and a half long, but as a longtime fan of the franchise, here are my 10 Ideas for New Star Trek Movies.

1. Let Noah Hawley and Quinten Tarantino make their movies. I can understand some trepidation about the latter, but it'd be kind of interesting to let different directors explore the franchise and see what their takes on it are.

2. For the love of Spock, NO MORE REBOOTS. Star Trek '09 was excellent. Breathed new life into the franchise. Made a bold decision to free itself of the constraints of canon. The scale was epic. It looked cool as hell and then Into Darkness turned out to be a parboiled remake of the greatest movie of the franchise. Beyond was way better. But in short: just continue boldly going where no one has gone before. We don't need to go back to the beginning.

3. Don't be afraid to go back to the Prime Universe. Star Trek Picard proves that there's more stories to tell there- and with Deep Space Nine and Voyager just sitting there, you've got plenty of unexplored territory you can bring to the big screen.

4. Go exploring and find something truly alien. I don't think that's happened in a Trek movie since Star Trek: The Motion Picture (far more epic than you remember and low key underrated.)

5. So I know there's never-ending temptation to go back to the 'early era' of Trek- but if you're going to do that, watch Enterprise first and go for that era. You know which Captain of the Enterprise has never been seen on screen in a non-animated form? Captain Robert April. Hashtag just saying.

6. While the Romulan Supernova is a galactic disaster that has proven to be fertile ground for new story territory-- but there's also the aftermath of the Dominion War to consider. What does that area of the Trek universe look like right now?

7. The Wrath of Khan was a loose sequel to one episode of The Original Series... it worked pretty well, so why not try it again. I think "The Doomsday Machine" might work well on a big screen. (Underrated option: "The Lights of Zetar."- but also, this option can backfire as well.  Don't be touching classics like "The City On The Edge of Forever.")

8. Aw, hell. Just boldly go. Somewhere. Anywhere. Make it interesting. Don't beat the old, "but the Federation is corrupt and morally questionable" horse anymore- we've had upteen movies that mine that territory.  Try something new, will ya?

9. Andorians and Orions. Don't care how, just make it happen.

10. One potentially cool notion that pops up now and again out there on the internet is to invert it- do like a species who is making contact with the Federation for the first time and how they react and how their society changes. It'd be an unusual Trek movie-- but as the TNG episode 'First Contact' proves, it could make for compelling story territory- especially if you just drop the viewer into the middle of things.