This Week In Vexillology #232

October 07, 2017
We're starting our grand tour of German States with the perhaps (and I'm not German, so if you want to make a case for some other state, come at me, brah) the state that could be called the 'California' of Germany- that's right, we're starting in Bavaria: 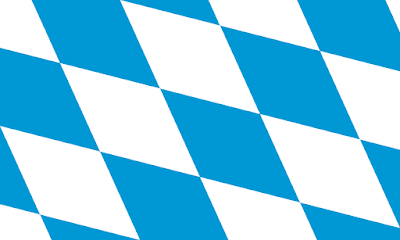 So where is Bavaria?If you picture Germany in your head, the lower right hand quarter (more or less) is where you'll find Bavaria. It's capital is Munich, home of Oktoberfest- so it feels right to start here. In terms of area, it's the largest state in Germany, and slides in at number two in terms of population (behind North Rhine-Westphalia). Bavaria has been around for a very long time. As a Duchy, it goes all the way back to the year 555, became an integral part of the Holy Roman Empire and existed as an independent Kingdom from 1806 to 1918 when it then became a Republic.

Flag-wise, there are actually two official flags of Bavaria, the streifenflagge (a horizontal bicolor of white over blue) a.k.a. the boring one and this one, the rautenflagge, a.k.a. The Lozenge Flag (or the cool one).The exact shade of blue has never been officially codified. There's no hard or fast number on how many lozenges the flag needs to have, but there has to be at least 21 and the top right lozenge has to be white. In terms of meaning there's either two arguments: the lozenges are historical or they represent the lakes and rivers of Bavaria. (There's a pretty good reference to them in the state hymn/anthem of Bavaria, so of the two explanations I prefer this one.)

There's really not much more to the Bavarian flag than that, though I noticed in terms of titles, they're officially a 'Free State' which got me wondering about the difference between 'Free State' and just a regular state over in Germany- turns out, it's pretty much the same difference between being just a regular state over here versus a Commonwealth. (Like Virginia, Massachusetts and I think Pennsylvania?).

So, we're off on our German excursion! Remember, until next time keep your flags flying- FREAK or otherwise!