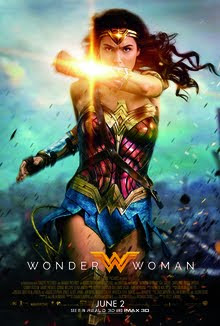 I've been wanting to see Wonder Woman ever since it was in the theaters over the summer, so once I saw that it had arrived on Redbox, I snatched up immediately to see for myself if it was as good as advertised. Turns out, the hype is real, the movie is excellent and I'll go one step further: this might be the best DC Comics movie yet.

The movie opens in present-day Paris, where Diana Prince (Gal Gadot), who works as an art restorer (which is a nice touch that I enjoyed) receives a photographic plate of herself and four men taken during World War I.  Looking at the photo, she remembers her past. She was raised on the hidden islands of Themyscira, home of the Amazons, who were created by Zeus to protect mankind. Her mother, Queen Hippolyta (Connie Nielsen) reveals the rest of their history- how Ares, son of Zeus, became jealous of humanity and tried to destroy it and when the gods attempted to stop him, he killed them all except Zeus, who wounded Ares* and forced his retreat. As a last weapon and protection against Ares, Zeus hides the Amazons and leaves them with a weapon, 'The Godkiller' to prepare them for the return of Ares.

Initially forbidding Diana to train as a warrior, Hippolyta eventually relents and lets her sister, Antiope (Robin Wright) to train Diana, but only if it's the more rigorous than that of any other warrior. In 1918, now grown into a young woman, the outside world finally intrudes upon the hidden island of the Amazons when an American pilot by the name of Steve Trevor (Chris Pine) crashes on the island and Diana saves him. A German cruiser follows him in hot pursuit and the Amazons kill the crew, but at the cost of Antiope, who sacrifices herself to save Diana.

Under interrogation from the Lasso of Hestia, Steve reveals that a war is consuming the outside world and he had stolen the book of a chemist, Isabel Maru (Elena Anaya) who was working General Ludendorff (Danny Huston) to create a more deadly version of mustard gas to be released at the Western Front. Believing the war to be the work of Ares, Diana arms herself with the Lasso and the Godkiller sword and leaves the island with Steve to track down Ares.

They get Maru's notebook to the Supreme War Council, where Sir Patrick Morgan (David Thewlis) is trying to negotiate an armistice. Initially opposed to them trying to destroy the gas, Sir Patrick gives Steve enough money to put together a team and head over to Germany to find the gas and confront Maru and Luddendorf, which, of course, they do and Ares reveals himself in the process. The final confrontation comes at a high price for Diana though and back in the present, she emails Bruce Wayne to thank him for the picture and reaffirms her mission to protect the world.

I loved this movie. This was a Super Hero origin done perfectly. They didn't fling gobs of mythology at you. They didn't leave you hanging for a sequel to finish the story. This was the complete story of how Wonder Woman came to be Wonder Woman and they could not have done a better job telling it. I love, love, loved their choice of World War I for the period. I think the carnage and destruction of the First World War really brings home the idea that Ares was loose in the world in a way that no other conflict could have- plus, you don't often see portrayals of American soldiers in The Great War, so that was a nice change of pace as well.

The Amazons of Themyscira felt fully formed and three dimensional- they were no tropes or cliches at work here. They were strong women, fully capable of kicking ass and taking names, which is exactly how they should be!

Overall: The introduction of Wonder Woman was probably one of the best parts- if not the best part of Batman vs Superman- Gal Gadot continues to shine in the role in her first solo outing as Wonder Woman. I'm not a huge DC Comics person...  other than Smallville and Supergirl, I just can't seem to get into Superman on a movie level. Batman has had some good outings on the silver screen over the years but neither of the other 'big three' have hit their movie debuts as far out of the park as Wonder Woman did. Mission very much accomplished and bring on the next movie! My Grade: **** out of ****

*I was a major mythology nerd when I was a kid, so this portrayal of Ares sort of bugs me. Especially the fact that he kills all the other Gods. I never found Ares to be all that sympathetic in Greek myths as a kid, but he never struck me as that much of a villain either- the same way that Disney butchers their Hercules by making Hades into the bad guy. Of all the movies and television shows out there, oddly enough it's Kevin Sorbo and Hercules: The Legendary Journeys that probably come close to getting it right, making Hera the great (and somewhat justifiable, given her husband's infidelities) villain. Just a minor, minor nitpick.