January 07, 2017
We're back! It's 2017! It's a brand new year! And we're heading into the home stretch of The Brown Flag Challenge- and, believe it or not, we're back in North America, heading just across the border to Canada for the Flag of Prince Edward Island! 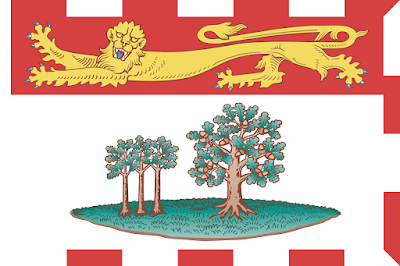 Adopted on March 24, 1964, the upper third of the flag features the English heraldic lion that's on the coat of arms of Prince Edward, Duke of Kent (who the province is named after) and it appears on the arms of King Edward VII as well. The lower two thirds feature a small plot of grass which represents both Prince Edward Island and Great Britain- both of which are islands. The three small trees represent the three counties of the province (Prince, Queens and Kings) and the big oak tree stands for Great Britain. (The trunks of all the trees are where we get the brown for the purposes of our Brown Flag Challenge.) The whole tree set up is a nod to the motto of the province- Parva sub ingenti, 'the small under the protection of the great'

One of Canada's Maritime Provinces, Prince Edward Island is the smallest Canadian Province, but it's got a big place in the history of Canada, as the Charlottetown Conference, which began the process of creating Canada as we know it today, was held on the island in 1864. Prince Edward Island, however, wasn't hip to what they decided there and held of on joining the Confederation, remaining a colony of the United Kingdom instead.

Here's the crazy part of the story: they were trying to build a railway in the in the early 1870s and were getting frustrated with the British Colonial Office and so began negotiations with the United States. That's right. Prince Edward Island was looking at all it's options back in the day. Happily, the Canadian Prime Minister at the time wanted to both distract people from an ongoing bribery scandal and check the expansionist notions of the United States and negotiating a deal to bring Prince Edward Island aboard the Canadian Train, as it were, proved to be just what he was looking for.  Prince Edward Island joined up 1873!

So, let's back track a second and talk about the Prince Edward that PEI is named after. Officially, 'Prince Edward, Duke of Kent and Strathearn' he was the fourth son and fifth child of King George III and- perhaps more importantly, the father of Queen Victoria. From a North American point of view, he's a pretty legit dude: he's was the first member of the Royal Family to actually live in North America for more than a visit/vacation. He was the first member of the Royal Family to visit the United States after independence and he was the first guy the use the term 'Canadian' to refer to both French and English settlers in Lower and Upper Canada.

From a Canadian point of view, therefore, sort of a big deal.

Remember, until next time- keep your flags flying. FREAK or otherwise!