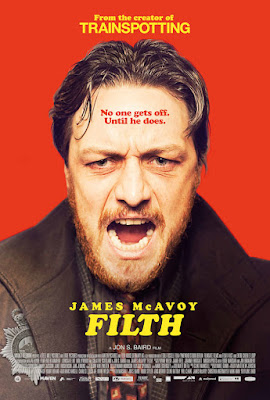 A New Year brought with it a new work schedule which means that I have every Thursday and Friday off now- which gives the Missus and I an entire night to you know, actually see each other and maybe talk to each other and drink a glass of wine- and yeah, sit on our couch and spin up the old Netflix and have a couch-movie date together. So, a new feature for the blog was born: Netflix & Chill, the chronicles of the (hopefully) enjoyable movie dates we have on our couch every week.

First up, was Filth. I had seen previews for Filth and it looked like a delightfully raunchy film from the creator of Trainspotting. It looked twisted, fun- maybe a dark comedy you could get behind? Plus, it had James McAvoy and that's usually a pretty safe bet for a halfway decent movie.

Yeah, oops. The key words in that last paragraph were 'from the creator of Trainspotting.' Which featured a creepy dead baby crawling on the ceiling tormenting Ewan McGregor. This should have been my first clue- because, while Filth was a decent enough movie, it took a sharp left turn down crazy lane and got dark- darker than I was expecting, to be honest.

Filth is the story of Detective Sergeant Bruce Robertson who's a cop in Edinburgh who's main goal in life is to secure a promotion to Detective Inspector- and to do so, he's willing to engage in and indulge in pretty much every conniving, foul, filthy scheme he can think of to sow discord among his fellow Detectives in an attempt to make himself the 'obvious' choice for promotion. He likes drugs, booze, sex- he bullys and takes advantage of a mild-manner bespectacled accountant, Clifford Blades who is a member of his Masonic Lodge- he also prank calls Mrs. Blades, Bunty and asks for phone sex.

After a Japanese student is murdered, Bruce's path to promotion seems open as he's handed the case. As he gets deeper and deeper into the case (this is where things start to get a little dark) it becomes increasingly clear that he's losing his grip on reality and hallucinating more and more. It's eventually revealed in one of the hallucinations that he's on medication for bipolar disorder, wracked with guilt over an accident that lead to the death of his younger brother during his childhood. We also figure out that his wife, Carole had left him for another man and isn't letting him see his daughter, Stacey.

The left turn down crazy lane comes late in the movie (I won't spoil it) but it wasn't what I was expecting at all. In short, though, Bruce is captured by the gang responsible for the murder and badly beaten- but he does kill the murderer by throwing him out of a window. It all comes unraveled for Bruce after that. He misses out on the promotion. He gets demoted to Constable. He puts his uniform on, sends a taped message of himself apologizing to Clifford and prepares to hang himself.  As he's up on the chair and about to tip it over, there's a knock on the door- it's Mary, a woman whose husband he tried and failed to save earlier in the movie- with her son knocking on his door. He then breaks the fourth wall, says his catchphrase, 'Same rules apply' and then the chair breaks under him and the movie's over.

Overall: Man, did this get dark in a hurry. Not precisely what I was expecting- about halfway through, I told the Missus that I thought it seemed like a really good adaptation of a book- which makes me wonder if the book is either a. better or b. worth reading at all, given how much of a downer this movie turned out to be. But hey, on the plus side- fans of Harry Potter will recognize Shirley Henderson as Bunty Blades. Turns out Moaning Myrtle well, moans pretty well. Me: ** out of *****, The Missus: *** out of *****