This Week In Vexillology #173

July 16, 2016
This Week In Vexillology, we're wrapping up our Caribbean tour with the flag of Dominica... (for the geographically non-inclined: there's the Dominican Republic and Dominica. Two separate countries. This is the flag of the latter.) 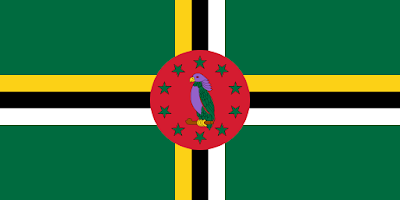 Adopted on November 3, 1978 as a civil and state flag, the green field represents the lush vegetation of the island. The cross stands for the Trinity and Christianity- the three colors in the cross stand for the indigenous population, the fertile soil and the pure water. The ten green stars are for the ten parishes of the country and the red disc at the center stands for social justice.

The parrot at the center is the national emblem- specifically, the sisserou parrot, which is an endangered species without only 250-350 left. The parrot is sometimes blue and sometimes purple- which the actual color of the parrot, but here's the crazy thing. Of all the flags in the world, Dominica's is the only one that uses the color purple. Nicaragua's does have a rainbow in it- but that's technically classified as violet, not purple.

So, there you go: the only flag in the world that uses the color purple.

So, glancing through the old wiki-page for Dominica, you can find a bit of instability between 1979-1981, with hurricanes causing some economic instability and an attempted takeover by mercenaries trying to overthrow the government of Prime Minister Eugenia Charles. (If there's a post-war leader that dominated and defined the politics of the Caribbean, I'd probably nominate Eugenia Charles. The second female Prime Minister in the region after Lucinda Da Costa of the Netherlands Antilles, she was the first woman elected as a head of government in the Americas- and currently sits behind Indira Gandhi and Sirimavo Bandaranaike as the third longest continuously serving female Prime Minister ever- as a bonus, she was also Dominica's first female lawyer.)

So, there you have it- the flag of Dominica! Remember, until next time, keep your flags flying- FREAK or otherwise!