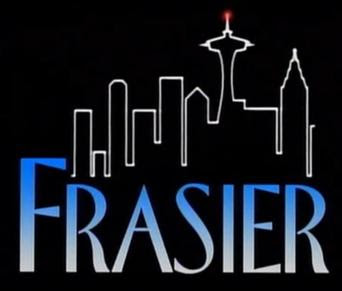 The Missus makes fun of my love of Frasier, but it dates back to college. Along with Friends, Frasier was one of those shows that you could always find on television, somewhere, some channel pretty much any time of time- kind of like Seinfeld. When it dropped on Netflix, I burned through about eight seasons of it before I got bored and gave up. (There are eleven seasons total, so it was somewhat understandable.) But now, I'm back and I'm going to blame a podcast for starting me on this journey once again.

I've been listening to the Nerdist Podcast for awhile now and Matt Mira shows up now and again and occasional drops references to his other podcasts- James Bonding (all about what you'd expect- James Bond) and his Frasier Podcast, Talk Salad and Scrambled Eggs. Finally, I bit and listened to an episode.

First of all, apropos of nothing- he's a double act for his Frasier Podcast- none other than Kevin Smith (yes, that Kevin Smith) is along for the ride. Well, maybe it's not exactly apropos of nothing- I mean, who knew Kevin Smith was such a big fan of Frasier?* But he is and he and Mira jump right in and start dissecting two episodes at a time- and to be honest, there's a lot of fascinating information about the show, the writing behind the show and sitcom writing/pacing in general I find fascinating. For instance- I had no idea that Frasier was so popular in the UK, but it is- and once you dig into it a little bit, you sort of see why.

They've tried to make an American version of Fawlty Towers, but the more you watch Frasier, the more you can see why it would be picked up by British audiences so easily. It's a small cast, taut writing and delightful amounts of straight up British farce show up from time to time. (The 2nd season episode 'The Innkeepers' could have straight up been an episode of Fawlty Towers. And is funnier than shit, even after multiple viewings.)

What has probably surprised me the most watching Frasier is the longevity of the character itself. Thanks to the magic of the internet and Netflix, I actually dug back into the mountain that is Cheers and found the episode where Kelsey Grammar makes his debut on the show and it's done in an amazingly subtle way. You spot Frasier well before he actually speaks,** but once he does, it's pretty much the same character- though perhaps without the intensity and the cutting wit he displays so frequently once he gets to Seattle. (Also, interestingly, without a family at that point. Something they had to do a little dance around once the parade of Cheers alums began showing up on Frasier.)

The geographical choice of Seattle is also something I found intriguing- reading the show's Wikipedia page, it made a certain amount of sense. They wanted to be as far away from the shadow of Cheers and Boston as they possibly could, but it also makes Frasier somewhat unique- like Minneapolis and The Mary Tyler Moore Show, Seattle and Frasier will always have that link. (Granted there's now Grey's Anatomy, which is set in Seattle, but it's weird in that sitcoms seem to have more connections with their geographic locations in many ways. For Grey's, the focus is on the sex and hijinks in the hospital, not the day-to-day routine of living in the city, you know?) At the time, it was just one of those cities that you didn't normally see on television and apparently drove a wave of cosmopolitanism in Seattle, as people wanted to 'live like Frasier.' So go figure. (It also makes me want to get up to the Pacific Northwest and get some coffee and check it out.)

I'm heading for the end of Season 5 right now and I'm not stopping yet... Frasier still holds up well after all this time- and more importantly, and this is my personal benchmark for sitcoms- it still makes me laugh out loud on a pretty consistent basis. If I can make it through all eleven seasons well, then hell, I might have to try me some sherry.

*I noticed that Kevin Smith seemed to be coughing an awful lot throughout these podcasts and began to wonder if he had either contracted some virulent form of TB or was smoking copious amounts of marijuana while watching episodes of Frasier. Turns out it was the latter and not the former, which just adds to the charm of it all.

**They gave Frasier a brother due to David Hyde Pierce's uncanny resemblance to a young Kelsey Grammar. Having back tracked to find Kelsey Grammar's debut on Cheers, I can confirm this is actually pretty true.