William Dalrymple is fast becoming one of my favorite historians- not just of South Asia, but full stop. 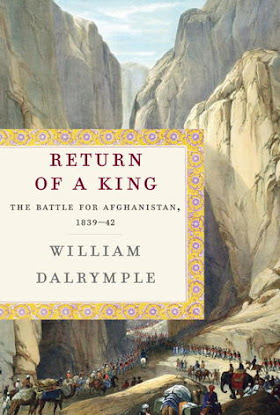 His writing is immersive, his research impeccable and his books always have connective tissue with some aspect of present-day politics. If you want to look at the original progenitors of untrammeled corporate power, read The Anarchy, his history of the rise of the East India Company. If you want a deep dive into Britain's first round of misadventures in Afghanistan, there's no better book to turn to than Return Of A King.

Culturally, the British disaster in Afghanistan- driven largely by the 19th Century preoccupation with Russian shenanigans that we now know as The Great Game, emanates more than people think it does. Dr. Watson of Sherlock Holmes fame served in Afghanistan (both in the original and in a case of 'history not repeating itself, but very often rhyming' in the excellent Benedict Cumberbatch/Martin Freeman updates as well- though granted, it was a different war in the latter circumstance.) Anyone who's read Kipling beyond The Jungle Book will have encountered Kim. If you're going for the deeper cuts, there's always George MacDonald Fraser and his Flashman novels as well. Military and political disaster aside, this is a conflict that captured the imagination-- I think largely in part because outside of General Gordan's disaster in Sudan and the Mutiny in 1857, there weren't really a lot of genuine disasters for British foreign policy in the 19th Century. There were wars, sure, but war is glorious and sometimes necessary, old chap, etc etc. But disasters?

The phrase 'history doesn't repeat itself, but it very often rhymes' could be the theme of this book. The British got sucked into Afghanistan following the overthrow of the Sadozai Monarchy. Shah Shuja was replaced by their tribal rivals, the Barakzais under Dost Mohammad Khan and when rumors and whispers reached British ears that Khan was prepared to do a deal with the Russians and the Persians to secure his throne (in the opening moves of 'The Great Game'), the British- not really understanding much of anything about Afghanistan (hey, that sounds familiar!) and wanting to find a Monarch who would be friendly to their interests (also sounding real familiar!) decided to put Shah Shuja back on the throne.

(Guess who shares the same tribal heritage as Shah Shuja? Oh, that's right: former Afghan President Hamid Karzai. And the Ghilzai tribes that opposed Shah Shuja's rule? They made up the bulk of the Taliban's foot soldiers. Welcome to Afghanistan, where the same shit keeps happening over and over again, I guess.)

The British being the British and the Russians lacking the military power to really project into the region (though the British didn't realize that at the time), they went ahead, assembled an army, and put Shah Shuja back on the throne. Everything was okay for about two years and then in a series of errors, both forced and unforced (forced: British soldiers were taking liberties with too many Afghan women, drinking, whoring, etc. Unforced: not having a good grasp at all on Afghanistan's complex tribal politics) saw Afghanistan explode into rebellion. Although Shah Shuja lasted longer than the British did, eventually under the halting guidance of General Elphinstone, the British ordered a general retreat from Kabul in like the middle of winter.

Dalrymple's description of the retreat from Kabul is harrowing. Not only were the elements against them, but going through the main mountain pass made their entire army sitting ducks for Afghan tribal forces that were armed with little more than rifles. Hundreds, if not thousands of native Indian troops (Sepoys) perished in the elements and froze to death. An entire company of British soldiers made a last stand and decided to go down fighting. Hostages ended up being taken and kept in captivity- the plight of a wife of the British General Sale is particularly amazing to me as she had her pregnant daughter with her throughout the ordeal. At the top of the pass, there was a huge barrier of holly (spiky, unpleasant holly) that they needed to get through and in the end, only one man made it to Jalalabad.

The retreat was a disaster in every sense of the word and it convinced the British to go back to Afghanistan with their 'Army of Retribution' to take revenge for the slaughter of their troops (which they did so in a brutal fashion) but in the end, once they had achieved their ends, they left again, the time for good. Dost Mohammad and his descendants would rule Afghanistan until the mid-70s.

If anything, the book only underlines the problems of the arrogance of power. The British, preeminent power in India, believed they could control a country they had at best, a limited understanding of. They felt their foreign policy objectives demanded it to counter a perceived Russian threat. Operating on what turned out to be fundamentally flawed assumptions, they blundered and paid a heavy price for it. One cannot help but notice the parallels between what happened in 1839 and America's experience in Afghanistan these past two decades.

Overall: Comprehensive, engrossing, beautifully written, and most of all informative, Dalrymple does his usual excellent job and illuminating an episode of history that you wish more people would have known about before embarking on two decades of nation-building in a complex and complicated country like Afghanistan. My Grade: **** out of ****