Squawk Box: All Or Nothing Arsenal/She-Hulk Attorney At Law 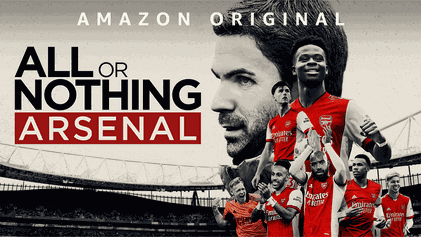 I tried to get into All or Nothing before, but I just... couldn't, for whatever reason. I wasn't about to watch the Tottenham season and the Manchester City season I tried for a few episodes was just... anti-climactic, I want to say would be the right word? (There's not a lot of drama in watching a Death Star Premier League Team do what it usually does, which is destroy most opposition.)

But then they finally did a season on Arsenal, so, naturally, I had to give it a go.

As a sports documentary, the production value is top notch. It looks beautiful- they talk to fans, bring in the community of North London and do their best to communicate a sense of place to the viewer and they do so really well. I also loved seeing how it all works behind the scenes-- the training sessions and the player performance reviews/one on one coaching sessions that they go throughout the season.

I also liked getting to know the individual players a bit-- between Bukayo Saka meeting up with a kiddo who sent him his pocket money after he missed the penalty in the Euro Finals, to Kieran Tierney talking about mental health or Aaron Ramsdale just talking about the transition from Sheffield up to a club like Arsenal all of it was really cool and just added to a portrait of the team and really deepened the whole behind the scenes aspect of it all.

The weird part about it all, was watching the season unfold. There's really not a lot of drama to be had watching matches that you remember reading/watching/listening to from the prior season-- but it's the halftime and post-game talks from Mikel Arteta that are probably the most revealing. You really get to see the depth of his passion and his outright annoyance when players don't execute the way he needs them too-- I know a lot of people were disappointed to miss out on the Top 4 last year, but to me, I was happy getting back into European football- even if it was Europa League and I felt like Arteta's rebuild or plan or vision-- whatever you want to call it-- was ahead of schedule. I think this season, if they can bolster the squad depth and don't pick up injuries down the stretch, I think they're in good position to make the Top 4 at minimum. They've been moving and playing at a blistering pace so far with great results-- but the defeat against PSV Eindhoven this week and the draw against Southampton show that the pace is probably unsustainable for the entire season. So, depth is an issue-- but, the World Cup being all weird is coming up at just the right point to give them a breather.

Overall: Great sports documentary-- probably the best soccer related one I've seen since Sunderland 'Til I Die. If they make another Arsenal season I'd definitely watch or any other teams I'm interested in. My Grade: **** out of ****

She-Hulk Attorney At Law brings Phase 4 of the MCU to a close (at least for television shows) and while it starts a little slowly and unevenly in parts, by the end of the show it's found itself a bit and finishes strongly.

The show opens with lawyer Jennifer Walters telling the viewers about an incident a few months earlier-- she and her cousin Bruce Banner were in a car crash after swerving to avoid a Sakaaran space craft and while attempting to get Banner to safety, Walters is cross contaminated with his blood, which causes her to transform into a Hulk. Unlike Bruce, however, this isn't a full on Dr. Jekyll and Mr. Hyde scenario-- Walters retains her memories and identity and just gets large, muscly and well, green. Bruce  trains her at a secret lab in Mexico where she effortlessly completes his training regimen and finally, reluctantly, Bruce accepts her desire to go back to her normal life.

Story over, we flash forward to the courtroom where Walters is interrupted by superpowered influencer Titania- Walters transforms, deals with her and finishes her closing argument.

After that, Walters gets fired, but gets another job with a firm that wants her to head up a new superhuman law division and work as She-Hulk full time. Her first case is defending Emil Blonsky/Abomination at his parole hearing which seems like it's going to go okay, until she finds out that he's been escaping to go fight in an underground fight club. Blonsky for his part, explains that he was taken from his cell by the Sorcerer Supreme Wong and returned afterward.

Various other legal challenges follow Walters over the course of the nine episodes-- but everything, as it turns out, comes back to the Abomination and the mysterious group of internet trolls/hackers that are trying to destroy her reputation. She also finds herself going up against Matt Murdock (a welcome return from Charlie Cox) but the two of them soon come to accommodation and after some fourth wall shenanigans in the finale, Walters gets the ending she wants and it's a happy one.

There has been a lot of online chatter about this show- but I also feel like that's rapidly becoming every show these days. The least bit of diversity is automatically treated as 'perfidious wokeness' and the commentary the show made- which was pointed and not at all inaccurate- about toxicity online and how toxic masculinity can be a bad thing- drew the usual condemnations from exactly who you would expect. I wish that people could just enjoy a show for the sake of the show and not slater today's online debates all over it, but that's probably impossible in the times we live in.

Did the alleged wokenesss of it all bother me? No. Fandom can be very toxic and that's very annoying and it's probably even more toxic if you identify as a female online, so I feel like it's legit. Plus- while I haven't read all the She-Hulk comics out there, it tracked for me from what I have read of her character. Very much a girl boss, very much one of the lawyers for the Marvel Universe if not THE lawyer and I seem to recall some 4th wall breakage now and again too- so the meta commentary isn't entirely out of character either.

It did not bother me. I think the show did start slow, but finished strong and Tatiana Maslany does a great job with the character. The introduction of Benedict Wong was great. It's nice to see Tim Roth again. If I have one complaint, it might be that Titania was set up to be a bigger deal then she turned out to be which was kind of left me feeling that Jameela Jamil was kind of underused here.

Overall: Do I think Marvel, like Star Wars might run into a content overload problem with it's blizzard of shows? I do. Did I enjoy She-Hulk? I did. My Grade: *** out of ****