I snagged this one on Audible, mainly because I was vaguely aware of a lot of the events described in 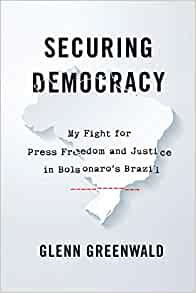 this book and wanted to be more informed about just what all had gone down in Brazil over the course of the past few years and Greenwald- love him or hate him- was at the center of the journalistic firestorm around a lot of it.

The structure of the book is well laid out-- before you dig into the reporting and the controversy Greenwald found himself in, he 'sets the scene' in a structured and informative way. While I knew the basics of Brazil's history, Greenwald filled in a lot of details I didn't know. Namely the depth of American involvement in bringing the military dictatorship to power- the depth of their repression and how it impacted society, but more importantly, how much of Bolsonaro's support came from people and companies that found their greatest success during the Dictatorship.

Greenwald then touches on his personal history in the country, how he came to meet his husband, David Miranda, their subsequent marriage, and how his reporting on Snowden with its revelations that the NSA and other western powers were openly spying on Brazil and monitoring the phone conversations of their leaders. Miranda and Greenwald settle into life in Brazil and soon become aware of a prosecutor, Sergio Moro whose 'Car Wash' Probe leads directly to deep-rooted corruption at the very top of Brazilian society. Moro rode a wave of public support to grow the probe and take down some of the richest and most powerful people in Brazil. It even played a part in the impeachment of President Dilma Rousseff and lead to the imprisonment of former President Lula da Silva.

Shortly after Bolsonaro came to power, an anonymous hacker approached Greenwald with a massive trove of previously undisclosed telephone calls, audio, and text messages which contained some of the private messages of the most powerful people in Brazil, up to and including people very close the President himself.

At this point, Moro, the Car Wash Prosecutor was now incredibly powerful. Bolsonaro had ridden a wave of public outrage about corruption straight to the Presidency by hitching himself to Car Wash and Moro had been rewarded with a Ministry position in the government. There was some unease growing about the excesses of the Car Wash prosecution, especially about its use of preventative detention in order to pressure accused individuals to name more people and thus deliver more convictions. The trove that Greenwald received confirmed that there was good reason to cast doubt on the dubiousness of these actions and much of the work of the Car Wash prosecution was suspect.

It was a lot and in a country that didn't have a history of leak-based journalism the way the United States did, deciding how to report this was just as important as the decision to report it. After figuring out the best way to report it, Greenwald and his team of journalists took the plunge, and then the backlash began. The death threats, the heckling at public appearances, the threats of prosecution, and multiple threats to his family all of that Greenwald had to live through while reporting the story. But in the midst of all the bad, there was good too. Journalists in Brazil and abroad rallied to defend press freedom. Parts of Brazilian society, so shocked by Bolsonaro's victory and more than a little scared, given his love of the military dictatorship and as a former Army officer began to believe that they could fight back as well.

This was a good read/listen for multiple reasons. First, it illuminated aspects of the corruption scandal in Brazil (Car Wash) that I was previously unaware of. It filled in a lot of blanks about the military dictatorship and how it continues to influences and impact Brazilian politics today. It's also refreshing to go on a deep dive into the politics of the largest country in South America- which is something people should pay more attention to, especially in America. I'm a big believer in actually getting to know your neighbors, which given our checkered history in the region can only be a good thing, if for no other reason that it could help prevent us from contributing or causing tragic mistakes in these countries that we don't have to bear the responsibility for.

Overall: solid, tightly written and a great quick listens, Greenwald lays out his role in one of Brazil's biggest stories in years. If you're curious about the politics of Brazil, journalism in general, or just want to know what all the big deal was about, this is well worth reading/listening to. My Grade: *** out of ****.