The first era/trilogy of the Mistborn series comes to a close with The Hero of Ages. Jumping forward a 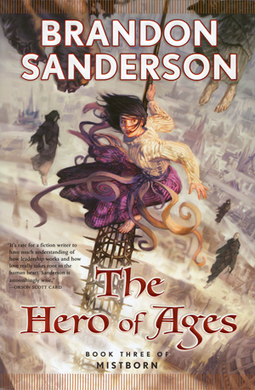 year or so from the events of the second novel, The Well of Ascension, we find Elend more comfortable and strong with his new powers of allomancy. Vin is still trying to figure out the agenda of the entity she released from the Well of Ascension- it's named Ruin and everyone agrees that it's probably bad news. But while Elend and Vin try to pursue clues left by the Lord Ruler with his five mysterious storage caches that were hidden all over the final empire.

On top of all that: things aren't looking all that great for the world in general. The Mists are everywhere now- including during the day. They're starting to kill people as well. Ash is falling constantly. Ash mounts (volcanoes) are erupting. It's getting harder and harder to grow crops and feed people: in short, everyone is becoming increasingly convinced that the world is about to end.

To make things even more challenging: Ruin can alter the words of messages and texts that aren't written on metal. He can also control/influence people more directly through the use of hemalurgic spikes which are essentially metal spikes of any size pierced into a person. The Steel Inquisitors of the prior two books use them and, as Vin and the others discover, the Koloss have them as well.

Our heroes are divided into two camps. Sazed, Breeze, and Aubrianne head to Urteau to try and establish diplomatic relations with the rebel government there. Sazed is still mourning the death of Tindwyl, his beloved. He still studies religions, but has lost his faith and is still looking for one that makes sense to him. They meet up with Spook, he's been in the city for a while and knows the lay of the land. He's also acquired mysterious new abilities and seems to be burning his tin constantly. He tells them of the anti-noble government headed by a former commoner named The Citizen.

Vin, Elend, and Set are trying to conquer the city of Fadrex, to find the last cache left by the Lord Ruler. Fadrex is run by a former Obligator, Yomen who still believes in the Lord Ruler and rejects both Elend and Vin as traitors to the Lord Ruler's empire.

TenSoon, the Kondra who aided Vin in the last book, returns home to his homeland and is promptly imprisoned and put on trial. He tries to convince his people that Vin, who killed the Lord Ruler has become the holder of their original contract. He tries to convince them that the world is ending, but they won't listen.

Eventually, time runs out for all our heroes. Vin attempts to confront ruin but eventually draws upon the power of the mists to ascend to another plane of existence to become Preservation, Ruin's opposite. Elend leads the survivors of humanity back to the Pits of Hathsin, where the Lord Ruler's atium stash has been guarded by the Kondra to shield Ruin's body and the source of his continued power. They burn the atium- and by extension Ruin's last remaining power in a desperate defense of the refugees by an advancing Koloss army too numerous to count and eventually, Elend dies and Vin attacks Ruin directly, realizing that Preservation created humanity that is imbued with both Preservation's power (creation) and Ruin's power (destruction) and she has both abilities within her as well. She and Ruin end up destroying one other and while Sazed and the others wait as the sun grows hotter and the world seems to be ending, the real Hero of Ages is revealed.

Humanity is saved. The world is moved to a safer orbit and the survivors emerge from the Lord Ruler's caches-- now shelters for humanity, into a world of blue skies, green grass, gentle warm sunlight, and flowers to begin rebuilding their society.

Overall: I discovered the wonder of listening to Audiobooks at 1.3 speed and whether it was that or Sanderson just no longer felt the need to muck about, this one sped right by. No time was wasted. We got to the climax and it was suitably epic in scope. Sacrifices were made. The reveal of the identity of the Hero of Ages made perfect sense given the events of the prior two books and not everyone dies in the end! I don't know if I'll get around to the Second Era of Mistborn, but I expect I probably will at some point- but in the meantime, The Hero of Ages was a tasty delicious climax to the first trilogy of the world of Mistborn, I finished listening to it and as a reader (listener?) I was satisfied and had no complaints about the ending. In fact, quite the opposite- This felt like it was going in a much darker and more depressing direction, so it was a pleasant surprise when it ended on a positive note. My Grade: *** 1/2 out of ****