Bookshot #151: The Song of Achilles

I have always loved The Illiad, ever since I was a kid. Admittedly, I was a kind of a weird kid and my 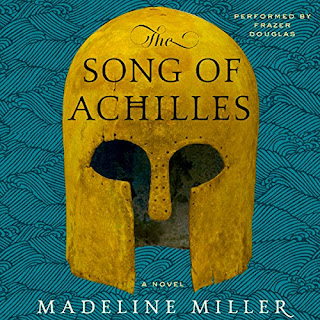 parents had an amazing prose translation that I would dearly love to get my hands on again. I read that thing over and over and over again until it probably wore out and the cover fell off. I also seem to recall in elementary school, I found an illustrated version that I would also dearly love to get my hands on again as well. I couldn't tell you anything about it, but I have a vague flash of a memory of a picture of the burning ships and the Myrmidons rushing to defend them.

All of this is to say that when I snagged Madeline Miller's Circe off Audible and saw that she had also written a novel called The Song of Achilles, of course, I was going to snag that too and listen to it first. Doing some digging on the book itself: Circe was actually Miller's second book and The Song of Achilles was actually the first novel she wrote. (Per the book's wiki-page it took her ten years to write and she abandoned her manuscript five years in to start over, struggling to find the voice of her narrator-- all of this to say is that good thing really do come to those who wait.)

First, because this was an audiobook, we've got to touch on the narration. Fraser Douglas does an amazing job-- I wasn't really sold on his take on Achilles early on. It seemed very clipped and formal- but gradually over the course of the book- I suppose as his relationship with Patroclus deepens and evolves, it relaxes and becomes less formal.

His take on Thetis took me by surprise, but it was also a take on the character that worked really, really well. I think the whole idea of a sea nymph- at least in my head- sort of translates to a warm and sun-dappled sea where mermaids and other nymphs frolic and engage in elaborate song and dance numbers in the style of The Little Mermaid. But from a mythological point of view- and certainly, from the point of view of the Ancient Greeks- the sea was not necessarily a happy and fun place. It was big, dark, scary, and wet and the nymphs that live in its depths would be harsh and hard creatures and in Thetis's case, probably not fans of the mortals who were smuggled to the depths to rape and impregnate her. It completed reinvented the character for me.

Second, we've got to talk about the book itself. The story centers not around Achilles, but around Patroclus. In The Illiad, Patroclus plays a pivotal role in the Trojan War, mainly by dying. His death enrages Achilles who ultimately kills Hector and then, in turn, is brought down by Paris and Apollo and killed and eventually- even though the narratives I've read usually end with the death of Hector- Odysseus comes up with the idea of the Trojan Horse to get the Greek into the city and Troy is sacked.  He doesn't seem like an important character- but his death certainly is. So a narrative from his point of view is a refreshing and interesting take on the story.

He's a Prince, for starters- that's something I didn't see coming. The son of King Menoetius, he's presented as a potential suitor to Helen along with all the other Kings and heroes that feature in The Illiad. He is rejected (obviously) but is obliged to take a blood oath to defend her marriage to Menelaus. (An interesting tidbit here: Penelope, the wife of Odysseus, is the sister of Helen!) But after Patroclus accidentally kills the son of one of his father's nobles- he's exiled to Phthia where he meets Achilles. Gradually, they become friends and then companions and Patroclus develops feelings for Achilles. Thetis hates Patroclus, considering him unworthy of her son, and tries to separate them by sending Achilles to Mt. Pelion to train under the centaur Chiron for two years. Patroclus follows and the two admit feelings to one another and become lovers.

Eventually, Helen is kidnapped and the Greeks are called to war. Thetis, knowing that Achilles is fated to die once Hector is dead, attempts to hide him on Skyros in the court of King Lycomedes- there, she forces him to marry his daughter Deidamia, who bears the son of Achilles, Neoptolemus. Patroclus follows him there and finds him again- though Odysseus and Diomedes eventually find Achilles and Patroclus and now it is Achilles who comes along with Patroclus to fulfill the latter's obligation under the blood oath. He vows never to fight Hector to avoid his death.

Here, the narrative touches on the familiar points of The Illiad. The claiming of Briseis by Achilles. The eventual rift between Achilles and Agamemnon. Patroclus, never a fighter instead uses his training by Chiron to become a field nurse- and when the Trojans are threatening the burn the ships, he convinces Achilles to lend him his armor so he can go and rally the Greeks. He goes too far, of course, and is killed by Hector. Achilles, grieving fights and kills Hector and then in turn is killed by Paris. At his request, his ashes are mingled together with those of Patroclus and buried together.

Achilles' son, however, has other ideas. He's something of a monster, who kills Briseis when she refuses his advances and reveals the relationship between the two men. He won't let the Greeks put Patroclus' name on the tomb they erect for Achilles, so Patroclus is bound to the tomb where his ashes are buried and unable to join Achilles in the underworld. After the war, Thetis returns to the tomb to grieve for Achilles and she and Patroclus share memories and eventually, she carves his name on the tomb, freeing him to join Achilles in the underworld.

I think if you had a mythology-obsessed childhood as I did, you would be understandably wary of retellings or reimaginings of the myths that wound themselves so tightly around your youth. I was wary, at first- but Madeline Miller produces an incredible and brilliant retelling of The Illiad that finally gives Patroclus his due. I don't know what the physical book would be like to read, but the audiobook flew by- I couldn't stop listening. The ending though, I think is worth quoting in full:

In the darkness, two shadows, reaching through the hopeless, heavy dusk. Their hands meet, and light spills in a flood, like a hundred golden urns pouring out the sun.

Hot damn if that isn't the best ending to a book I've read in a long time. That is just beautiful writing and it sticks with you as well. It's not often that the end of a book makes you pause- I can think of one, maybe two times where an ending has just rocked me back on my heels a little bit. This was one of them.

Overall: Amazing, excellent book- easily one of the best audiobooks I've listened to and certainly one of the best endings I've read in a while. This was one hell of a debut for Miller- granted, I'm ten years late to this particular party- but I can't wait to read- or rather listen to, Circe. My Grade: **** out of ****