I feel like Hollywood has been chasing adaptations of Dune on and off for decades now. David Lynch 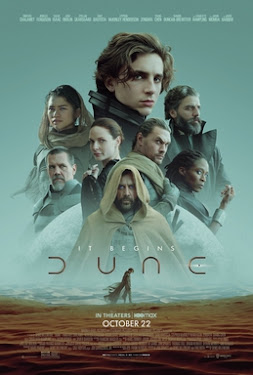 took the first real crack at it in 1984. The Sci-Fi Channel did a miniseries of it in 2000 and followed that up with a sequel mini-series that incorporated some of the sequels in 2003. There have been documentaries about attempts to get this movie made (Jodorowsky's Dune, which would have been wild had they managed to make it) and now, finally, I think they've got it right with what the best and perhaps most faithful adaptation of the book.

Set in the far future of the year 10191, Duke Leto of House Atreides, ruler of the planet Caladan is assigned by the Emperor to replace House Harkonnen as rulers of Arrakis. Arrakis is a harsh desert planet and the source of the mysterious 'spice' that is necessary for interstellar travel. Threatened by the growing power of House Atreides, the Emperor plans to have the Harkonnens (the prior rulers of Arrakis), stage a coup and take back control of the planet, destroying House Atreides in the process.

Duke Leto, Paul and the rest of their house land on Arrakis and Duke Leto makes it clear he wants to be a different type of ruler than the Harkonnens, trying to cultivate an alliance/friendship with the desert-dwelling natives of Arrakis- he has some success and the Fremen seem to believe that Paul might be the Messiah that they have been waiting for, but in the end it's not enough. They're betrayed by Dr. Yueh and Paul and Jessica manage to flee into the desert. Duke Leto, dying, is given one chance to assassinate Baron Harkonnen and almost succeeds in doing so.

Paul and Jessica eventually meet up with Kynes, Duncan, and other Fremen at an abandoned research station but the Emperor's soldiers find them there as well and they're forced to flee further into the desert. Eventually, they find the Fremen and after a duel to the death, Paul secures them a place with the Fremen and they go further still into the desert. The movie (Part One), ends with Jessica and Paul seeing a Fremen riding on the back of a sandworm.

Right off the bat, the cast is amazing: Timothee Chalamet imbues Paul Atreides with a nice balance of youth and someone struggling with the power he is coming to realize that's inside him. It's super subtle, but you can see his evolution over the course of the movie- from when he wakes up in the first scene and you see him shirtless and thin and almost gangly-youth in a way to the end when he and his mother head deeper into the desert to find shelter with the Fremen. As Paul evolves over the course of the movie, his performance evolves with the character. Rebecca Ferguson as Lady Jessica is another excellent choice because while in the 1984 movie, Paul recites the "Fear Is The Mind-Killer" mantra while his hand in the pain box, here, it's Lady Jessica, standing outside, frozen in fear at her son's fate. She captures the competing duties, loves, and loyalties of the character in her performance perfectly as well.

You can list every single member of the cast and you can't find a performance that seems weak. It took me a hot second to recognize Javier Bardem in this- he's that good. Charlotte Rampling also stands out as Gaius Helen Mohiam.

The cinematography is gorgeous as well. (The score as well! So good, so perfect for this!) This movie looks absolutely beautiful. But what I love the most- especially about the world-building are the subtle touches. The humanity of the far future has obviously, spread out into the stars and taken all the myriad cultures of Earth and blended them together. Just looking around at Caladan, you can see influences of multiple Earth cultures ranging from Japanese-style architecture to Greek (the Atreides reference is an obvious one)- but they all blend together to form something unique that feels truly alien.

Another subtle touch: the instrumentation. You kind of see it in the ornithopters (cool as hell, btw)- but there are no LCARS panels to be seen- it's all radios, knobs, and buttons that feel very retro, but real at the same time if that makes sense. So many visions of the future don't seem to involve basic things like buttons or knobs, it's all got to be glossy and shiny. It's nice to notice the small details that run contrary to what we've seen so many times before in science fiction. (Paul also learns about Arrakis using a projector that looks like the phone projector I've seen on Tiktok quite a bit as well- another subtle touch.)

Overall: I don't think it's enough to have finally adapted this book properly for the screen- that in and of itself is an achievement worth celebrating. But the quality of the film itself, from the cast to the cinematography, to the score and the sets, everything raises this film to another level entirely. I have faith that Villeneuve can stick the landing in with Dune: Part Two (agonizingly expected now in 2023!) and if he does, Dune will belong comfortably in the ranks of the Greatest Science Fiction Movies of all time as well as being an incredible film full stop. My Grade: **** out of ****