Bookshot #147: Anything But Silent

Shortly after K was diagnosed with apraxia, I think both the Missus and I did some digging to find books, 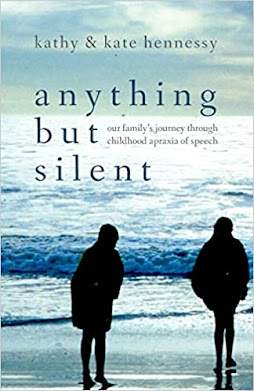 resources, anything about apraxia so we could understand what it was and how people deal with it, and more importantly, what the prognosis might actually look like. Anything But Silent made the list very early on, but we never actually ran it down and purchased the damn thing until recently. (Well, really until I found out about ThriftBooks.com and it was on there for a cheaper price than Amazon and I figured for that price, we may as well finally get this book and find out what it was all about.)

Written by Kathy Hennessy and her daughter Kate (with one chapter by her son Andy as well), Anything But Silent is a chronicle of their family's journey through apraxia of speech. At 154 pages, this is a quick read- and Kathy and Kate alternate chapters, so you can get the perspective of a parent and of a child who grew up with apraxia of speech. The writing style is very personal: this isn't some dry or dusty dome and both Hennessys are open and honest about their experiences both good and bad along the way.

Kathy Hennessy had not one, but two kids diagnosed with apraxia. The fact that she took that diagnosis and turned it into a lifetime of effective (and I'm assuming still ongoing) advocacy is incredible. Apraxia is... a lot. I don't know how the Missus took our initial diagnosis for K, but I remember taking him in for an assessment and just watching the assessment, and then finally, the SLP asked me if he had ever been diagnosed with apraxia and honestly, my first reaction was one of relief. It had a name. It felt like vindication for both the Missus and me that we had kept pushing, kept insisting that something was up with K and he wasn't responding to the speech therapy we had him, and "it" had a name.

I can deal with names. Names mean that there's information somewhere about it and that means I can read and figure out what we're looking at. The relief soon gave way to fear once we learned what we're looking at but now, it's just incredible the amount of progress that K has made. So I could identify with her feelings about the initial diagnosis and the amount of speech therapy she went too and the struggles with a family that might not be as supportive as they could. (In general, K is blessed with a supportive family in a way that it doesn't appear Hennessy was.)

Once again, I find myself so thankful that both the Missus and I work where we do- because the struggles that Hennesy describes with insurance sound positively nightmarish.

While the perspective of a parent was something I could identify with, it's the chapters featuring Kate and (the solitary one) Andy are the ones that- I don't want to say cheered me up, because I don't think that's quite the right word- but they were comforting chapters. It reinforces the idea that although there are days where it doesn't seem like it, there is, with a metric fuck ton of speech therapy, light at the end of the tunnel. Both of them are doing great, by all accounts and their apraxia is considered resolved. That squares with our own experience with K-- so much progress and he's talking so, so much- you just know that he's going to get there. It's not longer a question of 'if' to me, it's a question of 'when.'

Overall, a short little book demands a short little review- because really, there's not much more I can say about it. If you've got a kid or know someone with apraxia and want to understand it a bit more by delving into the ins and outs of speech disorders, this is an excellent volume to start with. I can highly recommend it. My Grade: **** out of ****