Well, first I wanted to watch The Suicide Squad. We've got HBO Max for a reason after all and goodness knows that James Gunn had done a fantastic job with Guardians of the Galaxy, taking a group of rogues and making them have a shit ton of fun, so I was interested to see what he would do with The Suicide Squad. But then, having watched that, I thought it'd be interesting to backtrack and watch David Ayer's Suicide Squad and see what I thought of that one as well.

Here's the thing: they're both actually pretty good movies. 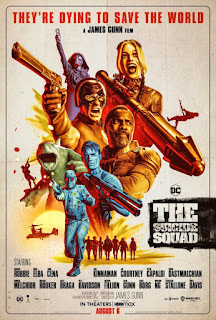 infiltrate the South American nation of Corto Maltese, whose government has been overthrown by an anti-American regime. Waller sends two teams- one that gets exterminated on the beach by the Corto Maltese army- which allows the other team, the "real" team to get in undetected. Their mission is to destroy a Nazi-era lab Jotunheim and its highly classified experiment Project Starfish.

This team is lead by Bloodsport (Idris Elba) and includes Peacemaker (John Cena), King Shark (Sylvester Stallone), Polka-Dot Man (David Dastmalchian), and Ratcatcher 2 (Daniela Melchior). Harley Quinn (Margot Robbie) and Colonel Rick Flag (Joel Kinnaman) survive the destruction of the first team- the former gets captured by the Corto Maltese government and the latter gets picked up by rebels lead by Sol Soria (Alice Braga). Bloodsport's team reunites with Flag and then Harley and they go into the capital to find the Thinker (Peter Capaldi) who is the lead scientist of Project Starfish whom they use to break into the lab.

What they find is, quite literally, a giant Starfish named Starro The Conquerer who was captured in space and creates smaller versions of itself to kill people and take control of their bodies. The US government, of course, has been secretly experimenting on Starro, using citizens of Corto Maltese for years. Flag, enraged by this, decides to leak a hard drive containing evidence of this but gets killed (or does he?) by the Peacemaker who is under secret orders from Waller to cover up the U.S. government's involvement in it. Starro breaks out, the lab is destroyed and the big old starfish sets to work on the population of Corto Maltese and Waller tries to pull her team out of their job- covering up American involvement and destroying the evidence- now complete. However, Bloodsport has different notions and rallies the team to defeat Starro. Soria takes control of the government and Bloodsport blackmails Waller into releasing him and the surviving members of the team from prison in exchange for keeping the contents of the hard drive secret. Having no other choice, she agrees. 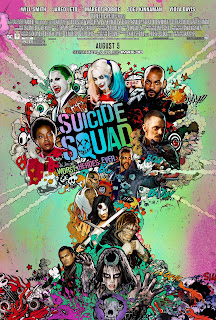 at the time (and maybe still is?) In the aftermath of Superman's death, Waller (Viola Davis) convinces the government to greenlight Task Force X to combat metahuman threats. Dr. June Moone (Cara Delevingne) an archaeologist possessed by the demonic witch Enchantress is set to be the most powerful member of the team. Waller has her heart, which, when stabbed, wounds her. However, she betrays Waller and conquers Midway City, transforming humans into monsters and bringing her brother Incubus along to destroy mankind and sustain her power until she can recover her heart.

This time, the team consists of Deadshot (Will Smith), Harley Quinn (Margot Robbie), Captain Boomerang (Jai Courtney), El Diablo (Jay Hernandez), Killer Croc (Adewale Akinnuoye-Agbale) with Colonel Rick Flag (Joel Kinnaman) as leader of the team. They penetrate Midway City, but their helicopter is shot down and they're forced to continue on foot.

Reaching their target- a skyscraper, they find that their target is none other than Waller herself who is busy trying to cover up her own involvement in Enchantress's revolt. When the rescue helicopter arrives, however, they find that the Joker (Jared Leto) has hijacked it, disabling Harley's bomb and rescuing her. Waller shoots the helicopter down, but Harley survives and, believing the Joker to be dead, rejoins the team.

Wanting her heart back, Enchantress kidnaps Waller. Deadshot finds Waller's secret files and uncovers the fact that Flag and Moone are in a relationship. The team abandons Flag to go and drink- El Diablo reveals that his powers led to the deaths of his family. Flag joins them and cuts the team loose, but realizing that they have an opportunity to prove themselves, they decide to save the world instead. Flag crushes the Enchantress' heart, which kills her and releases Moone. Waller knocks ten years off everyone's sentence and grants various requests and they all go back to Belle Reve- where the Joker breaks into rescue Harley.

An interesting mid-credits scene has Waller meeting with Bruce Wayne (Ben Affleck) who agrees to help Waller out in exchange for some metahuman files (which include Aquaman and company, who form the Justice League)-- she tells him to stop working nights, implying that she knows he's Batman. He tells her to shut down Project X or he and his "friends" will do it for her.

Overall: if there's a difference between these two movies, it's probably tone. Ayer's version is darker and grittier- Flag, for instance, is grimmer and hardcore, and while there are splashes of neon with Harley Quinn and the Joker especially, dark and gritty is the order of the day. That's not to say that Gunn's version pulls any punches- his color palette is more vibrant and colorful, which makes it easier to see the blood spurt everywhere. The music for both is top-notch- Gunn does have a magical touch when it comes to soundtracks, but Ayer's music choices fit perfectly with his take on the movie as well. I'm honestly not sure who to give the edge to here. I'll admit that Ayer's pacing is a little slower than Gunn's version- but Ayer also gets into the heads of his characters a bit more, which proves to be key at the end of the movie when the Enchantress is messing with all of their heads. Gunn just jumps right in with both feet and we're off and running and it's just so... fun.

The Suicide Squad: **** out of ****, because it's colorful, bloody fun. James Gunn makes this work really, really well and everyone seems to be having fun with this movie. It's gritty without tipping over into grimdark and it's a refreshing change of color pallette for a DC movie. I also like that it's not a reboot, but more of an indirect sequel- with some team members coming back, but not others. It's a nice nod to the fact that Ayer's movie a. exists and b. is actually pretty good, so c. they don't need to retcon it out of existence.

Suicide Squad: *** out of ****, because it can't quite shake the DC Grimdark thing too many of these movies have going on- but despite that, the dark and gritty thing for this movie works and I enjoyed both of them quite a bit.