The End of Afghanistan 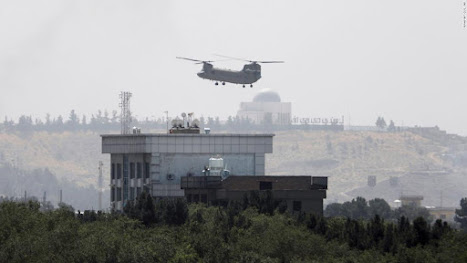 Maybe it was always going to end this way. I don't know. It's a weird feeling, knowing that you saw a war begin and now you're seeing it end two decades later.

I'm not sure I was ever convinced that the War in Afghanistan was going to be winnable. For a start, we plunged headlong into Iraq instead of finishing the job we started in Afghanistan. I never liked that. Just because you can handle two medium-sized conflicts doesn't mean you should.

Second, no one seemed to know what "winning" looked like. This is a country- or hell, maybe it's not even really a polity, more of a collection of tribal entities that argue a lot with guns, I don't know- but however you describe the place, it eats countries for lunch. It turned back Alexander the Great. It fucked up the British at the height of their powers. It ground the Soviets to dust. Who were we to think that it would be any different for us?

Putting on my poli-sci hat for a second: I think this is the death of neo-liberal interventionism for the foreseeable future. The "humanitarian" interventions of the 1990s gave way to the neo-con disasters of the 2000s and now we're done with that. I don't think the voters have the appetite for it anymore. The Establishment and the Military-Industrial Complex sure do, but the voters don't. "Nation-building" whatever the hell that meant, is done as a concept.

The hell of it is, it was well past time for us to get out. Two decades and we didn't know what winning looked like. Two decades and we didn't seem to have an exit plan at all. We couldn't keep doing what we were doing in there-- so, am I going to join the chorus of people being all, "we shouldn't have left yet" well, no, I'm not. We couldn't stay there forever. At some point, we were going to have to leave.

I guess what I can't stomach is the people we left behind. Any plan for a withdrawal should have started with finding everyone over there who helped us and telling them, "Here are green cards and plane tickets for you and your families. Get to the airport." It should have been priority one in any plan- though, honestly, looking at the chaos being sprayed all over the internet, it's not clear to me that we had a plan at all. Other countries seem to be doing better than we are: last I saw, the British Ambassador was still in Kabul personally filling out visas for people to leave. Germany is making plans to evacuate people. I saw Canada is prepared to accept something like 20,000 people and New Zealand- New Zealand! Is planning to evacuate the people who helped their forces.

What do we get? We get grainy videos on Twitter of Afghans falling off of transport planes as they cling to the side of them. The parallels of those images coming just weeks before the 20th Anniversary of 9/11 are just too damn real.

We get hand-wringing spin all over the networks trying to make sense of yet another abject failure of our intelligence community.  "This was always a possibility," seems to be the emerging talking point. Anything is always a possibility. 9/11 was always a fucking possibility until it happened. We spend billions- literally billions of dollars on intelligence and they didn't anticipate this? They didn't see this coming? $83 billion was spent in building an Afghan Army and they just sort of deflated like a flan in a cupboard or a wet fart noise.

Our infrastructure is falling the fuck down. Our schools are underfunded. Too many people have to resort to crowdfunding to get basic medical care. There should be heads on fucking pikes for this absolute debacle. There should be accountability for all this money spent- because you know damn well that one party will just make money printers go brrrr and the other will want to cut taxes for rich people and then when the rest of us are like, "why are the fucking bridges falling down?" Both parties are going to be all, "well, gosh gee, word salad word salad fiscal responsibility word salad word salad national priorities" and then not to a damn thing about it because they spent all the fucking money on an absolute disaster in Afghanistan.

There will be no accountability. Multiple people should have fucking resigned by now- at the very least they should have had the decency to at least offer. Congress should be dragging heads of agencies in front of public committee hearings to demand answers on what the fuck happened. There should be reforms of our intelligence community and military that demand accountability in exchange for the unlimited piles of fucking money we seem to give them. If we, the American taxpayer, give y'all BILLIONS OF DOLLARS, we have a right to be angry when there's precisely fuck all to show for it in the end.

But there will be no accountability. Because this is America and accountability is for poor people, minorities, and the rest of us peasants who don't get to walk with the privileged aristocracy of our Political Establishment.

Well, President Biden returned from his vacation to say a few words and while I agree that it was time to rip off the band-aid and do it- and honestly, Biden was probably the only President who could, because of his age and general lack of fuck-giving on the issue- the bulk of the speech was devoid of anything resembling accountability. We knew we were leaving but didn't want to evacuate our Afghan allies because the Afghan government asked us not to? Uh-huh. Okay then. He felt he had to stand by Trump's deal? Which is fucking laughable. He jumped back into the Iran Deal with two feet and canceled the Keystone Pipeline with a snap of his fingers- but he's stuck with this crappy deal the last guy gave him? Come on, now.

Props to Biden for ripping the band-aid off and not being suckered into "one more year." And he makes a fair point that if the Afghan Army isn't willing to stand and fight, why should Americans have to die for that?

But the fact remains: however much you dress it up, we basically cut and ran.* Afghans who put their lives and families on the line for us deserved better and we can do a damn sight better than 2000 Special Immigration Visas, I should hope.

I've written all of this acutely aware of the fact that I've never put on a uniform or served in any branch of the military, It's really easy for me to be pissed off at the incompetence of this, and even pissed off is a stretch, really. It's just disheartening and exhausting how incompetent we seem to be. Maybe it's age or nostalgia for my youth but we didn't seem to be that incompetent when I was younger. But that was then and this is now.

"The military is at war. America is at the mall." That's a quote that I've seen floating around a lot- and while, as a citizen, the sheer incompetence of our Establishment and the bumbling clusterfuck of a withdrawal championed by the Biden Administration- because yes, this is 100% on Biden- is absolutely rage-inducing, I cannot begin to imagine how veterans who served over there must feel.

My thoughts are with the Afghan people.

My thoughts are with the Veterans who served over there.

I hope that we can save as many of our Afghan allies as we can.

*I almost did a double major in Portuguese and reading Portuguese history sort of reminds me of their decolonization process. After the Salazar Regime fell, they just sort of...  left all their colonies. Granted they didn't have many compared to Britain or France, but you could make the argument that the precipitous nature of their withdrawal only contributed to decades of civil wars and instability that followed. This sort of reminds me of that- though what will result in the wake of our withdrawal from Afghanistan?

**I also love how Administration Officials are trying to insist that this isn't like Saigon in 1975. Um, yes it is. Doesn't mean it's not the right move, but it does mean Biden can be tagged for leaving people behind.