A solid and well-researched history of British rule in India, Jon Wilson's India Conquered aims to 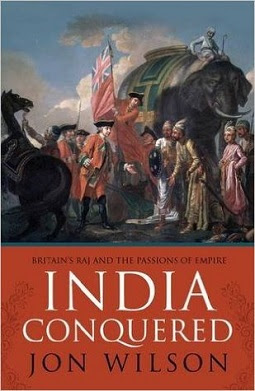 provide a reassessment of a lot of the mythology of the British Raj and I think he more or less succeeds in his goals. The general notion that Wilson is exploring with this book is the idea that British rule in India was coherent and powerful- while the reality is that British rule was uneven and based on violence and the use of force- and left behind a piecemeal patchwork of economic development in their wake.

I think you can challenge Wilson's argument on some points- some notes on the wiki-page for the book point out that his analysis of the period prior to the British is somewhat lacking and that there's a lot of hand-wavey generalizations that pop up over the course of the book. Nuance, naturally, would undermine a lot of Wilson's thesis- or at least if it didn't undermine it, it would certainly distract from it.

The point about the generalizations is true enough, but the real interesting critique I think is about his lack of analysis of the latter stages of Mughal rule. Granted I haven't done academic-level deep dive readings on late-stage Mughal rule, but there are similarities between the structure of Mughal rule versus what the British eventually end up setting up in the Raj. My gut instinct really depends on how the Mughals were viewed by the time you get to the period just before the British arrived. If they were still seen as outsiders partnering with local elites to provide a sort of overlordship then pre-1857 that seems to be the model the British were trying to emulate- and you can argue that with the number of princely states that were left technically independent after 1947, elements of this model sort of remained throughout.

But Wilson's argument becomes a lot more solid with post-1857 British rule in India. After the Mutiny, the British were undoubtedly nervous, more cloistered together, more distrustful of Indians and more inclined to use force to back up their rule. His notion that the infrastructure and economic development the British began to embark on only benefited Indians in passing or tangentially is a convincing one.

Railways came fairly late to India and they were mainly implemented not to spur economic development or investment in India, but to make sure there was the right infrastructure to move British military forces around quickly in case they needed to be so. The struggles of Tata Steel- still a major company in India today- to get started and off the ground only underlines Wilson's argument: the British interests were their own and they weren't necessarily about developing the Indian economy-- and what's fascinating about this point is that as Indian elites began to realize the level of disinterest the British had in actually developing the Indian economy the early nationalist movement began to grow a sort of parallel economy, where you can do business at Indian-owned banks, etc, so on and so forth.

The eventual withdrawal of the British and the chaos of Partition also serve to buttress Wilson's argument. The British just left. There was no serious attempt to hold onto India or the integrate into deeply into the Commonwealth. Britain realized it couldn't hold on and that was more or less that. Any pretense that India was a vital part of the British Empire and would never be surrender more or less vanished overnight- which only serves to prove that the British were, as Wilson suggested, more interested in their own interests and if they happened to deliver some benefits, tangible or otherwise to Indians, that was a happy accident more than designed by policy.

(There's an interest alt-history notion to consider and probably abandon, but if India had been granted Home Rule and Dominion Status as a response to say, The Mutiny-- or maybe in the early 1900s, perhaps- how different would things have turned out? It's doubtful it would have ever happened, but it's intriguing to consider.)

Overall: if you're looking for a solid and unsparing history of the British Raj, this volume is pretty decent. It doesn't put on the rose colored glasses- in fact, it actively tries to avoid them and the result is pretty good and it's not a door stop either. Wilson's writing is approachable and readable-- this isn't a dry and dusty academic tome and I went through it pretty quickly. My Grade: **** out of ****