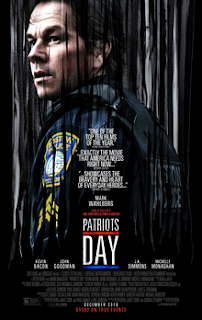 Watched On: Netflix
Released: 2016
Directed By: Peter Berg
Starring: Mark Wahlberg, Kevin Bacon, John Goodman, J.K. Simmons, Michelle Monaghan
Rotten Tomatoes: 80% Tomatometer, 86% Audience Score
Pick: Mine
2013 seems like a lifetime ago now- and if the past is another country at this point looking back at the America of 2013 where the Boston Bombing happened really does seem like gazing into some kind of alternate universe. I can't imagine what it would take to get people to pour into the streets to cheer to police having someone in custody in 2020. But in 2013 it happened- along with a bunch of stuff that I straight up did not remember.
The movie opens the day before the bombing where BPD Sgt. Tommy Saunders (Mark Wahlberg) captures a suspect and fails to convince Commissioner Davis (John Goodman) to let him off from punishment duty the next day- meaning that yes, he does have to work the Boston Marathon. Tommy, despite grumbling, wakes up early the next day and kisses his wife, Carol (Michelle Monaghan) goodbye and heads down to the work the race.
Meanwhile, as the race begins, Dzhokhar (Alex Wolff) and Tamerlan Tsarnaev (Thermo Melikidze) also head downtown-- but they're carrying their pressure cooker bombs, which, in due time, detonate.
After that, the movie follows more or less the sequence of events from the actual bombing with and I haven't done a scene by scene comparison- what feels like a high degree of accuracy. There were parts of this movie that were straight up news to me-- I thought the second bomb went off much later than the first one did and was actually wondering for several minutes if there was going to be a third detonation. (Obviously there wasn't.)
The FBI, headed up by Special Agency Richard DesLauriers (Kevin Bacon) start an immediate and massive investigation. Despite pressure from local officials, DesLauriers resists releasing photos of the suspects until someone leaks the photos and he has no choice. Door-to-door searches for the Tsarnaev Brothers begin in Watertown and intensify when they kill MIT Officer Sean Collier (Jake Picking) and then carjack student Dun Meng (Jimmy O. Yang), telling him they commited the bombing and are going to New York City to do more. Meng escapes and gets to a gas station where he alerts police and Watertown Police Officers including Sgt. Jeffrey Pugliese (J.K Simmons) get into a massive and frankly insane shootout with the suspects featuring explosives being tossed at squad cars- that I had no absolutely no memory of.
With Tamerlan injured, he orders Dzhokar to escape and get to New York City- not wanting his brother to fall into police custody, Dzhokar runs him over as he escapes. Meanwhile the FBI has been busy: the raid Dzhokar's dorm room and take his roommates into custody (they were charged with obstructing the bombing investigation) and they bring Tamerlan's wife (an unrecognizable and frankly excellent Melissa Benoist) in for interrogation, but learn nothing of consequence from her.
The Governor and the Mayor, however, have had enough by that point and lock down the city to do a house by house search for Dzhokar and eventually find him hiding in a boat and take him into custody. Tommy Saunders gets to go home after a very, very long couple of days at work.
Some interesting things about this movie: everyone in it- except Mark Wahlberg- is an actual person. Wahlberg- I was told, anyway- was a composite character maent to represent BPD. The other nice touch this movie has is the end, where they actually show BPD and other officials attending a Red Sox game after the fact and being honored and they interview some of the survivors- including a man who lost a leg who ended up running and completing the Boston Marathon in subsequent years.
Overall: I think this is actually going to stand the test of time quite well. The cast is excellent. While it was perhaps, too close to the actual bombing I can't really find too much to complain about- except for the poor little kid who gets separated from his parents. Turns out, he gets reunited just fine with his parents, but we don't get to find that out until the interviews with the survivors after the fact. So there was a part of me that was like, "WHAT HAPPENED TO LEO?" when the movie ended, but I'm glad we found out- one way or the other. Underrated movie this. My Grade: *** out of ****