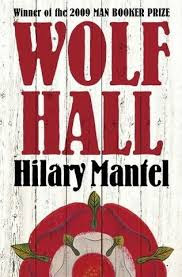 I can't quite remember why I picked up this book-- I think at the time I was on a kick of reading more 'Award Winning Books' just to see what qualified as 'Award Winning' writing-- (I must have figured that Lincoln In the Bardo would satisfy the requirement for the National Book Award, so Wolf Hall could be my Man Booker Prize winner) but whatever the reason, I finally dug it up cracked it open and plunged headfirst into it.

Wolf Hall tells the story of the rise of Thomas Cromwell-- who goes from servant/fixer/Chief Secretary of Cardinal Wolsely right up the ranks to Chancellor in the court of King Henry VIII. At this point, anyone with a casual knowledge of history or a subscription to Showtime/Netflix should have a passing familiarity with the general arc of Henry VIII and the whole mess of Tudors that convulsed England in the early 1500s. The brilliance of what Mantel does, however can't be understated: by taking a relatively familiar story and shifting the point of view to a character that most people either wouldn't recognize or view as somewhat minor in the grand scheme of things- though I think that latter view would be incorrect- she takes a whole swathe of history and makes it fresh and more importantly, makes it feel new- which is an impressive feat in and of itself.

Cromwell comes from 'low birth' and grows up in the mean streets of Putney with an abusive father. He's smart and soon learns to survive and climb his way up to a position of relative prosperity by hitching himself ("choosing his Prince") to Cardinal Wolsey. He fled England as a child and has been a soldier in Italy by the time the book has opened- he's got a wife and daughters and a son. In short, he is the epitomy of a survivor and a self-made man-- which in England of the 1500s is an impressive feat.

Wolsey is in some trouble though and Cromwell doesn't know how to fix it. King Henry is desperate for a male heir and so far, Queen Katherine has been unable to provide one. Wolsey is working frantically behind the scenes to get the King a divorce, but when he can't get the job done, he's stripped of his titles and banished from court. This puts Cromwell in the position of being Wolsey's advocate at court, which brings him to the notice of the King- but ultimately, he can't save Wolsey- who is arrested and eventually dies- but not before Cromwell suffers extreme personal tragedy (the heart wrenching loss of his wife and daughters- which is some excrutiatingly beautiful writing on the part of Mantel. An absolute gut punch to read)- and he makes sure to note who is responsible for bringing down Wolsey-- and, he remembers.

With Wolsey gone, Cromwell "arranges his face" (his way of putting on a 'poker face' to coneal his true intentions) and "chooses his Prince"- in this case a King and what Henry wants, Cromwell proves to be adept at getting for him. In short order, he's gotten the divorce that Henry wants-- Anne Boleyn, who has long been catching Henry's eye, catches Henry himself and is made Queen. She gives birth to a daughter (Elizabeth) and loses another child over the course of this book and it's clear that Henry's interest has started to wane and that he wants out. By the end of the book, momentum for a new wife is starting to build and when Cromwell plans out the King's summer tour, he includes a stop at the home of the Seymours (including Jane, future wife #2), which is, of course, Wolf Hall.

I've been trying to figure out how to describe Mantel's choice of point of view because it's interesting. It's like Cromwell is speaking in the third person, but indirectly, if that makes sense? So instead of "Thomas Cromwell walked up the stairs" it's "He walked up the stairs"- but it's not straight third person POV either, because the whole book is really from his point of view. It's... well, if 'indirect 3rd person' isn't the right term for it, I don't know what is really- but, it's an interesting choice that seems a little odd at first, but as you get further and further into the narrative, you see that it enables you to get deeper into the character than you normally would while maintaining a certain distance, in a weird way. It seems like a contradictory muddle when you see it on the page, but it works beautifully in the book itself.

What's brilliant about this book is that it crackles with tension throughout-- when the back of the book proclaims that 'England is a heartbeat away from disaster', you really feel that sentiment throughout. Cromwell's machinations- the shifting power politics as various factions manuver to make sure they can prevent or cause a dynastic struggle to fall their way. I've never taken a serious crack at historical fiction, but I've got to think that it's one of the hardest genres to write full stop- but to elevate to a level where you can make everything seem fresh, new and absolutely electric with tension is a massive achievement in and of itself. My Grade: **** out of **** and you better believe I'll be getting the other two books in this trilogy as well.