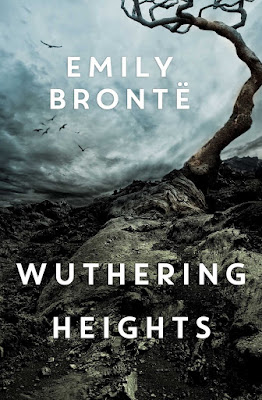 My general knowledge of Wuthering Heights consists of the song by Kate Bush and I guess Heathcliff the cartoon cat. I had this impression that the book was about a wild, tempestuous romance on the barren moors of the north of England- but apparently, my impression could not have been more incorrect.

The story opens in 1801, when Lockwood, a young man from the south of England arrives to rent the house of Thrushcross Grange up in Yorkshire. He goes to pay his respects to his landlord, Heathcliff who lives in a remote house out on the moors called Wuthering Heights. He finds an odd cast of characters in the house: Heathcliff seems to be the master, but his manners are less than gentlemenly. Joseph is a grumpy old servant. There's a young woman who seems to be the mistress of the house and a young man that he assumes is a member of the family, but is treated as a servant.

Lockwood gets snowed in and Heathcliff grudgingly allows him to stay the night and leads him to a bed chamber full of books and graffiti left by it's former inhabitant, Catherine. He dreams of her ghostly spirit attempting to enter his chamber and wakes crying out in fear, which rouses Heathcliff who rushes into the room. Lockwood is convinced that it wasn't a dream- that he really did see the ghost, and surprisingly, Heathcliff agrees and opens the window, trying to coax Catherine's spirit to enter. When nothing happens, Heathcliff gives Lockwood his bedroom and stays at the window keeping watch. The next day, he escorts Lockwood back to The Grange, where he becomes ill and is confined to bed for an extended period of time. The Grange Housekeeper, Ellen Dean tells him the story of the family at Wuthering Heights while he recovers.

Everything starts 30 years before, with the owner of Wuthering Heights, a Mr. Earnshaw. He lives there with his son, Hindley and younger daughter Catherine as well as a young Nelly Dean who is a servant. He finds a homeless boy in Iverpool and adopts him, eventually naming him Heathcliff. Hindley becomes jealous of Heathcliff, whom he belives is his father's favorite. Heathcliff and Catherine become close friends and spend hours together playing on the moors. Hindley eventually leaves for University. He returns and events lead him to do his level best at splitting Catherine and Heathcliff in two-- which he eventually succeeds at, after Catherine confesses she cannot marry Heathcliff due to his social standing- he runs away, vowing revenge and to come back more worthy of Catherine.

In the intervening years, Mrs. Earnshaw gives birth to a son, Hareton and dies. Hindley descends into drunkenness and Catherine marries Edgar Linton.

Heathcliff does return, now independently wealthy-- Edgar's sister, Isabella falls in love with him, which he does not discourage as a means of getting revenge on Catherine for marrying Edgar. Eventually Edgar refuses to let the two of them see each other, sending a now pregnant Catherine into despair. Heathcliff takes up residence in Wuthering Heights and induces Hindley to waste most of his wealth on gambling, eventually more or less displacing Hareton as owner of the estates. Isabella and Heathcliff elope, yet Isabella remains desperately unhappy. Cathreine gives birth to a daughter, Cathy before dying. Isabella flees Heathcliff for London and eventually has a son Linton.

Tired of death yet? But wait- there's more! Hindley dies, making Heathcliff the master of Wuthering Heights. 20 years pass and everyone grows up--- Heathcliff takes back his son when Isabella dies- but he's not a strong fellow, so he too, eventually dies, but not before Heathcliff more or less kidnaps Cathy and blackmails her into marrying his son so she can go and be by Edgar Linton's dying bedside. Eventually Hareton and Cathy- probably two of the least objectionable characters in this entire book, are flung together and by the end are ready to marry. And oh hey, guess what? Heathcliff finally dies.

If there's a TL;DR to this book, it's "everyone is awful to each other and dies, and then the two people that are the least awful get married. Also, there are moors."

I honestly don't know how to feel about this book-- it's not at all what I thought it was. I suppose if you take the notion that Catherine and Heathcliff are equally terrible in their own ways and thus deserve each other, you might be able to find some shred of romantic redemption in all of this, but in the end, it's real hard to see anything romantic about this at all.

It's 19th Century Britain, so obviously there are plenty of class issues at play here- but I keep getting te hint that Bronte wants to imply that Heathcliff is a person of color, but can't quite say it- which adds a potential racial dimension which would have been extremely controversial now and might be considered either pointed social commentary or problematic by today's standards, I can't tell which.

Overall: Everyone is awful to each other and dies more or less sums it up. My Grade: ** out of ****