N.K. Jemisin has been one of those authors that I've seen around for years now, but I've never actually 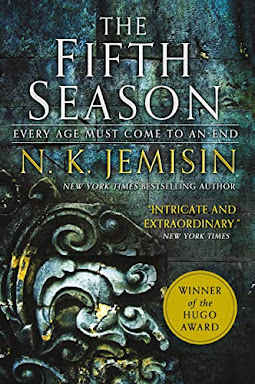 gotten around to reading any of her stuff. After what seemed like an extended stretch of reading a lot of Brandon Sanderson, I wanted to cleanse my palate a bit and start reading a bit more widely, so as part of a general push to read books I've got but haven't read yet as well as read more authors that I haven't read yet, I snagged The Fifth Season on Kindle and gave it a go.

The world of The Fifth Season takes place on a single supercontinent called the Stillness. Every few centuries, the inhabitants go through what's called a 'Fifth Season' where the climate changes, usually in varying levels of catastrophe. The society on the continent is highly stratified with different castes occupying places in society. (Strongbacks are laborers, Resistants tend to care for the sick, Breeders are self-explanatory, Innovators are engineers, doctors, and other problem solvers and then there's a Leadership caste on top.) Outside of the castes, you've got geographical affiliations (Equatorials, who live in the stable equatorial regions and then the Midlatters who live in the middle, Nomidlats- who live north of the middle latitudes and Somidlats are south of the middle equatorial area.) and then you've got a few others: Commless, people without a community, Sanzeds, who live in the ruling Empire, and finally that brings us around to the central characters of this world: orogenes.

Orogenes are people with the ability to control energy- specifically in the ground and temperature. In a continent that is riven by tectonic disasters periodically, the ability to calm or redirect seismic activity is incredibly important- but with power- which can be used to flash freeze people solid if their power is used in that way- comes fear. Orogenes are feared and many are murdered by mobs in smaller towns when their powers are discovered. If not killed, they are controlled- given to the Guardians who take them to the Fulcrum in the great city of Yumenes to be trained in how to control their powers and grow them.

That's the world where our story begins--

Essun is a middle-aged woman living in a small comm called Tirimio. Secretly, she's an orogene and she's got two children with the ability as well and most of her time is spent hiding her own abilities as well as her children's- but one day she comes home to find her son has been beaten to death after revealing his abilities by her husband. Her daughter is gone and her husband has taken her. Numb, she shuts the massive earthquake (touched off by a man in the prologue) away from her comm, which saves it from destruction, but alerts the citizens to her presence. She's driven out of her village and starts after her husband, intent on finding her daughter and killing him for the death of her son.

Along the way, she meats Hoa- a strange boy with ice white skin and hair, and then she meets Tonkee, a commless geomest/engineer, and eventually, they find a hidden comm called Castrima that's built-in a huge underground geode.

The second strand of the novel features Damaya, who is a young girl in a northern comm who is discovered to be an orogene- but turned over to the Guardians to be taken to the Fulcrum to be trained. The Guardians have abilities of their own and their purpose is and has always been to control and manage orogenes. She moves up through the ranks of the trainees but one night, a young daughter of a wealthy and well-connected family sneaks into the Fulcrum and asks Damaya to help her access the interior of the largest building. They are discovered there and Damaya is almost killed, but instead is allowed to take her first 'ring test' to become a fully trained orogene- a risk, since trainees have more time to prepare- but one she is ultimately successful at and chooses her new name and that leads us until the third strand of the novel.

This strand features Syenite, a rising star in the Fulcrum who is paired with the most powerful orogene in the Fulcrum, Alabaster, and their assignment together is twofold: one, to travel together to a coastal comm to help remove a reef that is blocking their harbor and secondly, to make a child together. The two cannot stand each other personally but do eventually conceive a child together. They arrive at their destination and check out the reef, but find out there's one of the mysterious obelisks that are around but no one really knows what they do underneath the reef as well. The obelisk reacts to their presence, which eventually freaks out the Guardians, who send one of their numbers to kill both Syenite and Alabaster- the Guardian incapacitates Alabaster, and Syenite, desperately reaches out to the obelisk and the resulting reaction between her power and the obelisk destroys the town and eventually, she wakes on a populated island off the coast with Alabaster and eventually, the two settle into life and have a few years of peace before the Guardians find them again and the story that takes place over the course of the novel is woven together into a culmination that the reader doesn't expect.

Overall: Much like The Wizard of Earthsea, there's a lot to like about the magic system here. It's one of those that doesn't get lost in complexity- the powers of the orogenes are elemental but Earth-based and it's one of those weird tricks where there are some details, but not so much that it demands an explanation of how it all works for the reader-- I haven't written a lot of fantasy but I expect there's a balance involved there and Jemisin gets it exactly right.

I also like how this is described as a 'science fantasy' book. I don't know if this is meant to be a far-future Earth, but you could easily envisage it as such- millions of years into the future when the continents have drifted back together again. There are references to artifacts of what the characters refer to as 'deadciv' or the dead civilizations of the past-- in fact, there's a commonality in the parlance in this world where people abbreviate their language ('comms' instead of communities, etc.).

As with good genre fiction, there's reflections to be found in our world: the minority shackled and controlled due to their status and referred to by a slur (orogenes are referred to as 'roggas' in a derogatory way) a world belching out climate change events that can devastate civilization on a regular basis, the parallels to main challenges in the real world are obvious, but not overbearing either. In short: this is an immersive world, and a great story and I can't wait to get into the second volume of this trilogy. My Grade: **** out of ****