Bookshot #159: A Wizard of Earthsea

It took me way too long to get around to reading one Ursula K. Le Guin book and I didn't want it to be 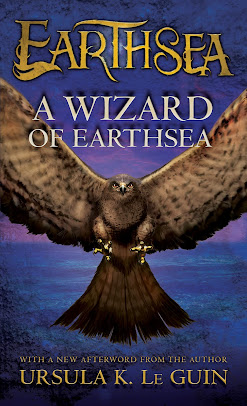 that long before I tackled another. I had heard a lot about Earthsea, but I had never actually read any of the books- which given the fascination of my youth with all things fantasy-related (Lord of the Rings, The Belgariad, Shannara, etc.) Earthsea was a surprising omission. So, I grabbed the first book on Audible and gave it a listen.

Shout out to Rob Inglis who does a fantastic job with the narration for Audible. A little digging around on the interwebs reveals that this is definitely not his first rodeo with voiceover narration and, in fact, until Andy Serkis did it in 2020, his reading of The Hobbit was the only unabridged edition of the book ever made. He did one-man stage productions of The Hobbit and The Lord of the Rings back in the 70s and 80s which must have been amazing to see. In short, Mr. Inglis is, as the kids these days like to say: thoroughly legit. His voice I would best describe as melodic and sonorous and fits the milieu of the book just about perfectly.

Set in an archipelago known as Earthsea, A Wizard of Earthsea tells the story of Duny, nicknamed Sparrowhawk born on the island of Gont. His aunt discovers that the boy has great power and begins to teach him what little magic she knows, but the true extent of his power is only revealed when their island is attacked by Kargish raiders. He summons a fog to protect his village and its inhabitants which lets the villagers drive off the raiders- but attracts the attention of the powerful mage, Ogion, who takes him as an apprentice and gives him his true name: Ged. Ogion teaches him many things, but Ged is too eager to learn more-- and inadvertently summons a strange shadow, which Ogion banishes. Ogion realizes that Ged needs more than he can offer and sends him to the school of wizards on the island of Roke.

His skills continue to grow and develop there, but when a rival student provokes him into a duel and Ged tries to cast a powerful spell to summon the spirit of a legendary dead woman, but it goes wrong a shadow creature is released instead, which attacks him and scars his face. The Archmage sacrifices his life to drive the shadow away.

Injured in the attack, Ged spends many months healing before resuming his studies again- but the new Archmage warns him that the shadow is an ancient evil that wants to possess him and the creature has no name. Eventually, Ged gets his wizard's staff and is sent to the Ninety Isles, protecting the poor villagers from the dragons that have taken up residence on the island of Pendor. Still sought by the shadow, Ged realizes he cannot protect the islanders from the Shadow that hunts him as well as the dragon and figures out a cunning way to defeat the dragon and find out the name of the shadow.

The shadow pursues him to Osskil, where he tries to see if the fabled State of Terrenon can help him (it can't) and then he flees again, this time transforming himself into a falcon and escapes. Going back to Ogion on Gont, Ogion advises him that all creatures have a name and tells Ged to find it and confront it. After many more twists and turns and adventures, Ged finally corners the shadow and names it with his own name- the two then merge, and Ged is healed and whole again.

There's a lot to unpack in this book. Right off the bat: I love the setting-- I don't know what it is about an archipelago, but it just works for me, you know? I love how Celtic the setting seems-- a lot of the imagery brings to mind like Saxon isles getting raided by Vikings, that kind of thing. These (at least the isles that Ged and company seem to hang out on) isles- at least in my head are green and rocky and beautiful and desolate all at the same time.

I also loved the magic system in this world. So much of it is centered around ideas of balance (which the series wiki-page attributes to Taoist influences) but also the power of someone's true name. There's no mucking about with elements or complicated incantations-- if you know the right words you can make the power happen.

Overall: shortish listen, doesn't get lost in a myriad of worldbuilding yet manages to be beautifully immersive at the same time, A Wizard of Earthsea is worth exploring. My Grade: **** out of ****