June 01, 2022
Like most bibliophiles, I am guilty of accumulating books that sit on my bookshelves for years before I 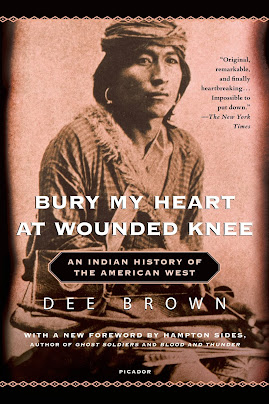 actually get around to picking up and reading them. Sadly, Bury My Heart At Wounded Knee was one of those books. I had taken a run at it once before but didn't get very far- whether because it was frankly too damn depressing (it is) or because I had gotten bored, I can't remember- but I sat down and actually read the thing cover to cover this time.
For all the current shouting about CRT and things like the 1619 Project (which I haven't read), no one wants to talk about the inescapable fact of life in contemporary America: many of us (a lot of us white, yes, but many of us in general) are profoundly ignorant about our own history. Too many Americans found out about the Tulsa Race Massacre from a superhero show on HBO. Personally, I had no idea about the Great Sioux Uprising or the 38 Lakota, or the expulsion of the Lakota from Minnesota until I moved to Mankato.
We do too much shouting about what our history should be and do too little learning about what our history actually is. That, I think is what makes this book so important- leaving aside the fact that it's remained in print since 1970, so it's got staying power.
No surprise: it's still pretty damn depressing to read, but it's also necessary, in a way. If the history we're taught in schools about the westward expansion and Manifest Destiny is told through rose-colored glasses, then really you should read this book alongside, and together you might escape with something close to a decent picture of what actually happened. It is the tiny hammer designed to smash those rose-colored glasses and awaken the citizenry to the brutal truth that our westward expansion came at the cost of many First Nations peoples: their lands, their lives, their way of life.
Brown breaks down the stories by tribe and ranges all over the American West. Some, I'm more familiar with (Little Crow's War, The War for The Black Hills) and some are entirely new to me (The Flights of the Nez Perces, The Ordeal of Captain Jack)- but all of them share a common depressing theme of land displacement, broken treaties, greed, and outright genocide. Even when tribes like The Utes cooperated with the authorities and confined themselves to a reservation, it wasn't enough. If local state leaders or the local business community wanted the land, they would get the land- usually through deceit or other depressing ways.
There are moments of humanity that shine through- but they're relatively rare in Brown's narrative. Chapter Fifteen features the story of Standing Bear of the Poncas, who (depressingly) had to go to court to be recognized as a person who is entitled to the protection of the law. That was, surprisingly for the times, successful. Ultimately it wasn't successful enough and the ruling allowed some of the Poncas to resist forcible resettlement but not all of them. Chapter Seventeen, The Last of the Apache Chiefs tells the story of Geronimo and his resistance- but until the government made a seemingly arbitrary decision to bring the Apaches to heel, John Clum, the agent at one of the reservations allowed and encouraged the Apaches to police themselves and make their own decisions- which is a rare glimpse of sensible and dare I say enlightened policies that, of course, went absolutely nowhere.
The narrative, of course, culminates in the massacre at Wounded Knee. It's not the first massacre described in the book, but it is the last and perhaps the most brutal of all. It's also sobering to consider that I was born less than a hundred years after it happened. History can seem dry, dusty, and downright remote sometimes- but really, the sheer volume of change that happened over the course of the 20th Century means that a lot of the time, it's closer than you think it is.
Overall: I think this is an important book and if you're looking to get a better grasp on history, you should track this down and read it. Placing it beside the oftentimes rose-colored glasses version of Westward Expansion that is taught in schools lends balance to our mainstream narratives of that period of our history and I think helpfully opens eyes to the reality of the costs of expanding to the west. What strikes me now is that after the initial wave of expansion pushed to the west, the population moved on. Today, you look around at the land drenched in so much blood and pain and while it's probably not as simple as it seems, it sure does look like there ended up being plenty of room and land to share.
The book isn't free from criticism- more modern narratives challenge it and the wiki-page reveals some criticism that outside of direct quotes, there's not a lot of primary source citation. It is also pretty obvious that Brown is aiming to present a fairly singular view on these events. I think that goes back to what I said about balance- if the existing historical narratives at the time were balanced to one point of view, putting this book alongside them evens them out a bit. (The question of whether historians and books about history are required to provide that balance? That's a whole different discussion.)
All that being said, this is worth reading. As with any history, take it with a grain of salt- but the thing with salt is that sometimes it can actually enhance the flavor. My Grade: **** out of ****