I stumbled across the Revolutions podcast a few years back and ate that up like nobody's business. Not 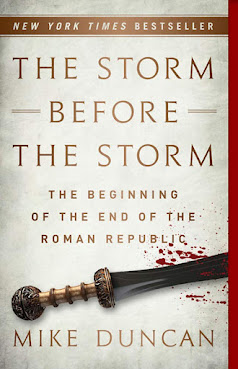 wanting to stop consuming quality history content, I went ahead and took the plunge into The History of Rome- though I'll freely admit that Roman history is not something I've ever been particularly interested. Having consumed all that content and appreciating the level of work that Mike Duncan put into creating his respective podcasts, I figured the least I could do was buy his book, The Storm Before the Storm.

As I mentioned, Roman history just isn't my thing. That's not because I dislike it- I grew up eating up Greek mythology and loved the epics of Homer, but I just never got into it for whatever reason. Other than the basic outline of Roman history (first a city-state, then a Republic, then Ceasar comes along, crosses the Rubicon and they become an Empire which eventually splits in two while Byzantium continued and the west collapsed) I didn't get into the nitty-gritty details of it all.

So, initially, it's refreshing: Duncan focuses not on the history that many people know, but on a point just before it (the storm before the storm, as it were). Focusing on the years between 146-78 B.C., the reader is introduced to the Roman Republic that finds itself at its very limit. Once just a collection of city-states, now it was a large empire. Rising economic inequality, combined with social and ethnic prejudices made for a toxic stew, and into the breach stepped a generation of ambitious politicians no longer beholden to the old principles of the Roman Republic.

The first thing I found fascinating right off the bat was the question of citizenship: Italians (non-Romans who lived in Italy) initially didn't have voting rights in the Republic, which I had no idea was such a point of contention back then. (When I say the point of contention, the emphasis should be on 'point' as in 'sword-point'.) The fact that politicians like the Gracchi Brothers emerged to exploit these tensions shouldn't be surprising, in fact, the universality of opportunistic politicians is strangely comforting in a 'the more things change the more they stay the same' kind of way- even if these politicians laid the groundwork for the collapse of the Republic itself.

But you could also argue that maybe at that point the Roman Republic was kind of screwed anyway? If there's an underlying theme to all of this, it's that the Republic bit off way more than it could chew and the influx of slaves enriched the aristocracy at the expense of the working class and regular citizens and it's clear that they were not up to the challenge of fixing that. Slave uprisings (the Servile Wars) were followed by external challenges (the Jugurthine Wars in North Africa and the Cimbrian War in Northern Italy) lead to the Social Wars (Civil Wars) that lead to the rule of Sulla, which in turn, ushered in the final phase of the Roman Republic.

I am loathed to delve into the inevitable comparisons between the latter stages of the Roman Republic and present-day America, but they are, perhaps, inevitable at this point. The rampant socio-economic equality is the obvious point of comparison, but while looking online might convince you that a Civil War is coming (the right) or that a Trump Victory in 2024 will lead to a Fascist dictatorship (the left) I think we need to step back and consider that a lot of that rhetoric is politically useful noise for the Establishment. (A notion in and of itself, that I acknowledge requires a whole new blog post. But either way, the analogy is easy to latch on to, but more difficult than you might think to bring to its logical conclusion.)

I loved this book. It took me a bit to really dig into it- but that was more due to my unfamiliarity with the history itself, instead of the prose. Duncan's writing is accessible and easy to read- this isn't a dry and dusty tome of history. Anyone should be able to dig into this with pleasure and there's a sprinkling of Duncan's wry humor throughout that only added to my overall enjoyment of this.

Plus as a nice bonus, I totally get memes like this now: 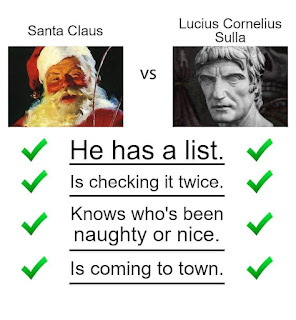 Overall: If you're a fan of Roman history, then this probably falls under your 'must-read' list. If you like history and want to try something new that's accessible, readable and not the size of a large doorstop, then this book will be right up your alley. My Grade: *** out of ****