I did a lot of research focused on South Asia for my Master's Thesis, so I've been slowly collecting 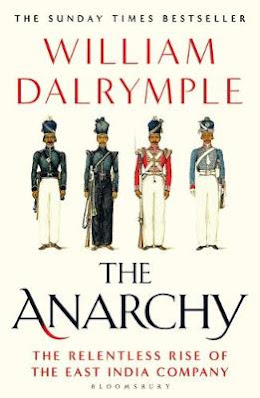 books over the years that, should I ever go back and take a run at a Ph.D., would help me have a well of potential historical and source material to call upon- or at least be familiar with, as I would plan to focus on South Asia in some way should I ever get that wild hair up my behind to go back and get a doctorate.

And in that sense, The Anarchy is an excellent addition to a small and growing collection of books. But, it is also a fascinating historical account in and of its own right. It traces the story of the East India Company- from its humble beginnings in 1599 when it received a royal charter that granted them a monopoly on all trade between England and Asia. Early on, no one really took the English all that seriously. The Portuguese and the Dutch were still the dominant trading forces in the region and the English were just trying to get a foot in the door.

Their attempt to force their way in and not play by the established rules of the region (in other words, paying Mughal taxes and staying in the respective "lane" as it were, reserved for merchants) lead to the Anglo-Mughal War (there are going to be a lot of these damn wars before this book is done, but they're all important to the narrative that Dalrymple successfully builds) that nearly proves ruinous for the English in India. But when the Mughal Emperor Aurangzeb dies in 1707, the power of the Mughals begins to destabilize, and soon India is used as a theater for various wars between European powers.

(This was probably one of the more fascinating aspects of the book: we take it for granted that the globe as we know it is interconnected these days- but you don't think about the global aspects of things like the Austrian War of Succession or the American Revolution as having global ripple effects- but they very much did. The former drove the two Carnatic Wars between the French and English East India Companies for commercial dominance over the subcontinent and in the wake of losing America, events in India made the British even more nervous-- as Cornwallis did much to salvage is military reputation after Yorktown during the Third Anglo-Mysore War.)

The increasing influence of Europeans is felt throughout the subcontinent as Mughal power fractures and then declines-- after Plassey, control of Bengal Province passes to the company, but being a company interested in maximizing profits for their shareholders, they ended disrupting the existing societal and economic arrangments that directly lead to a devastating famine. The efforts of Warren Hastings to actually try and improve governance ultimately lead to his recall and impeachment- which was apparently the main political scandal of the day. His successor, Cornwallis had no interest whatsoever in planting the seeds of a colonial population that might be willing to rebel against the crown in the future.

Dalrymple is just an excellent history, full stop. I love his style- this book was compulsively readable and he uses a ton of primary sources from India itself- making this book what I imagine is a long-overdue correction of the historical record- or at least one that doesn't view Britain's time in India through rose-colored glasses. But the nice thing about it: he doesn't have an axe to grind about this either- it's not, "oh imperialism bad, bad, bad" even though, on balance, imperialism is obviously bad- it's more of a critique of what untrammelled corporate power can do. Eventually, the East India Company became too big to fail. Eventually, it morphed from a company acquiring trading interests and protecting trading privileges into an outright military power. That too, with the capture of Delhi and the... well, an acquisition would seem to be the right word- I'm sure they thought of it more as liberation- of the admittedly diminished Mughal Emperor, they cloaked their growing power in something resembling legitimacy as well.

The punchline of course is what happened to the brand name itself- because crazily enough, as I'm typing this, I'm looking at their website. It's still around today- as a boutique store which, according to Dalrymple is owned by a pair of brothers from Kerala.

Overall: What more could you ask for in a history book? The author is knowledgeable, a great writer, weaves a great and informative narrative that has wisdom and insights that are still relevant today. My Grade: **** out of ****