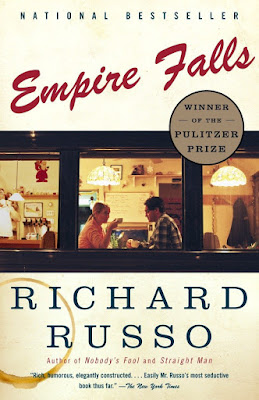 The Quiet Man has been recommending this one to me several times over the past few years and I finally snagged it from the Public Library and I can see why he reccommended it- the way Russo draws all of these characters is brilliant, subtle and thoroughly complete. They're all- from major to minor characters, fully three dimensional and realized from the top of the head down to the tips of their toes-- which, in my experience, anyway, is a rare and magical feat when authors can pull it off.

Empire Falls is the story of a small town in Maine and the people that inhabit it- opening with a history of the town and the Whiting Family that dominated the textile industry that made it so propserous it then flips forward to the present day where Miles Roby has been working at the Empire Grill for 20 years, having dropped out of college to come home to take care of his mother and keep an eye on his brother. His ex-wife Janine is about to get remarried to local fitness club owner Walt Comeau. His daughter Tick is wrestling with the usual trials and tribulations that high school brings. And hanging over all these character is the Francine Whiting, widower of the late textile magnate Charles Whiting who owns just about everything left in the town- and feels like she 'owns' Miles himself.

The fortunes of the town have taken a turn for the worse. The textile mill has closed down and the place is slowly decaying and just about everyone around Miles is urging him to do something. His divorce has been amicable. His ex-wife's new husband to be eats at his restaurant- but Miles seems to be bottling everything up inside and taking it all with a placid acceptance that annoys his brother, David. David is a recovering alcoholic who survived a nasty car crash and is growing marijuana out at his house in the woods outside of town- he thinks Miles should break free of Francine Whiting and start his own business and his promotions and specials have brought in a decent amount of business to the grill.

Meanwhile, his Dad Max is a ne'er do well who is always ready to filch money from his son, his soon to be ex-wife has kicked him out of his house. While Miles ends up in a better position in many ways than when he started, Janine's arc moves in the opposite direction as she sees the reasons for her choices crumble one by one and finds out that nothing is what she thought it was. In the meantime, Mile's daughter, Tick, has to deal with an ex-boyfriend and football star Zack Minty, who won't leave her alone. (He's also the son of a police officer, Jimmy Minty, who was friends with Miles back in high school.) There's a new kid, John Voss that the principal wants her to befriend and she resents her mother for leaving her father and hates her mother's new soon to be husband, Walt.

Miles remembers better times from his youth, when he and his mother took a trip to Martha's Vineyard and he met a man there named Charlie Mayne who seemed to make his mother very happy indeed-- and Miles wonders about that mysterious man- and when he finds out the truth behind that trip to Martha's Vineyard it spurs him to act, finally and that in turn leads to a series of events that no one, not even Miles could have predicted.

I don't know if I'd want to call 'a piercing and detailed look at small town American life' a genre, but I have read a few books over the years that attempt to do what Empire Falls actually does with mixed results. There is the old commandment of 'write what you know' that a lot of authors seem to embrace and I don't have a problem with it at all, but occasionally you'll read a book that just blows all the other books out of the water and this is one of those books. Shamefully, I don't know if I ever got around to reading Lake Wobegon Days- which means I should probably turn in my Midwesterner card, but that's gotta be on the Mount Rushmore of this particular ouevre/genre and I'd put Empire Falls right up there alongside it. (Weirdly, another novel I've read in much the same vein is Staggerford by Jon Hassler- which also features a main character named Miles.)

Overall: Captivating story driven by characters so detailed and minutely constructed they practically leap out of the page at you- I was also somewhat surprised to discover that HBO made a miniseries out of this novel with a fairly impressive cast back in 2005- I'll have to see if I can check that out to see how it compares to the novel. My Grade: **** out of ****