This Week In Vexillology #290

May 11, 2019
Well, we've done it. We've finally reached the end-- there might be some armorial banners or purely metropolitan/city banners out there that I've missed, but according to the map I've been coloring in with sharpie and the one of the computer screen I've been squinting at, this is it: Greater Manchester and Tyne and Wear.

Let's start with Greater Manchester. As it turns out, Manchester is relatively easy to find. Essentially if you find Leeds and Liverpool, Manchester is more or less in between them. Make your way across the map from one of them to the other and you'll be bound to hit it. It's one of the great cities of the north of England and, naturally soccer is kind of a thing there, with Manchester United and Manchester City being the major clubs in the area. Wigan Athletic plays in the Championship. Bolton Wanderers, Oldham Athletic, Bury F.C. and Rochdale A.F.C. all play in League One and Salford City F.C. plays in the National League and Stockport County F.C. and F.C. United of Manchester play in the National League North. So there's professional football on all levels all over Greater Manchester. 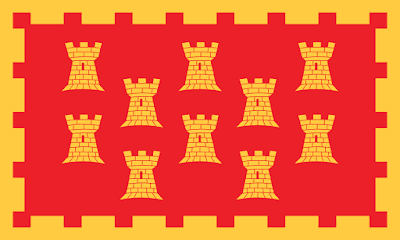 Right off the bat, this is an interesting one. The Flag Institute won't register to it- because they won't register flags for counties other than historic counties- but since it represents a county, it has a special legal status under the UK Flag Flying Regulations. (Also: there are UK Flag Flying Regulations. That's cool.) Basically, the ten towers stand for the ten metropolitan boroughs of Greater Manchester. There's honestly not much more to it than that-- the wikipage for the Coat of Arms pretty much says the same thing- though adds a motto: 'Ever Vigilant'

Next up, Tyne and Wear is another more or less metropolitan county-- this one is further north than even Manchester. If you follow the east coast of England up from Skegness past the Humber Estuary and past Scarborough and Middlesborough to get to Sunderland and Newcastle and you've hit it. Tyne and Wear essentially consists of Newcastle and Sunderland and the surrounding areas. 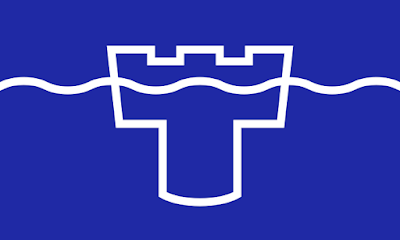 Here's the weird thing about this flag. So far, I haven't been able to find a decent explanation for it. And I've spent a couple of days digging through the interwebs to try and find one. Going out on a limb, I'd say the shape of the fortress is a rough 'T' for Tyne and the wavy line that presumably represents the River Tyne forms a rough 'W' for Wear inside the boundaries of the fortress. I'm also going to say that there's been a fortress at either Newcastle or Sunderland for a suitably historical length of time.

So, that's all I've got. And that, more or less finishes our tour of the counties of England. Remember until next time, keep your flags flying- FREAK or otherwise!