This Week In Vexillology #201

February 18, 2017
You know, I promised you 'Lost Weekends In Vexillology' last week- I just didn't figure I'd be launching into them so soon. But what better follow-up to my Psephology post on the legislative elections Uttar Pradesh than going back in time- way back in time- to dig into my very own personal collection to take a look once more at the flag of India: 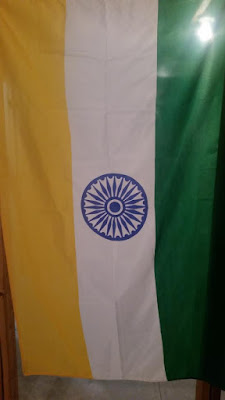 Before we get to the flag, I have to admit that this one is something of a head-scratcher. For as long as I've been keeping track of the flags I've looked at, India has always been on the list. It was an early acquisition for my personal collection and I've always thought I had knocked it off way early on in the process when I was going through some flags in my personal collection, but I could never find the original post. So it's something of a mystery- which, now, happily, we get to resolve.

Well, right away I realized I needed a new picture for this post. The Flag Code of India specifies that the saffron band of the tricolor be on the left when displayed vertically- so I had to fix that. Another fascinating thing I found out: the manufacturing process is regulated very tightly by the Bureau of Indian Standards who certifies every flag. Guess what? My particular flag- not so much. The guidelines cover "sizes, dye color, chromatic values, brightness, thread count and hemp cordage." (Wikipedia) Defects from the guidelines can result in fines or even jail terms... (New Flag Goal: get a BSI Certified flag of India!)

During the struggle for independence from Britain, it was Gandhi who recognized the need for a national flag- the initial design featured a spinning wheel on a red and green  banner (red for Hindus, green for Muslims.) He was aiming to have the flag ready by for the Congress session of 1921, but it didn't get done on time. Which turned out to be a good thing, because it gave Gandhi time to refine his original design, into this: 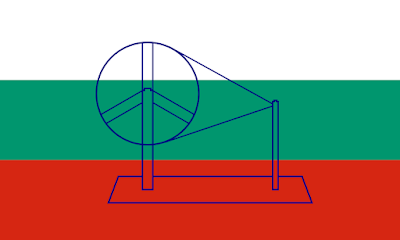 The white stripe was added to the flag to represent all other religions. Gandhi moved toward a more secular interpretation of the flag's colors by the end of the decade: "stating that red stood for the sacrifices of the people, white for purity, and green for hope." (Wikipedia)  However, another flag was gaining in popularity at the time as well- thanks to an incident in April of 1923 in Nagpur when the Swaraj flag was hoisted and a clash between Congressmen and the police resulted. That flag became the official flag of the Congress Party at it's 1931 meeting and it looks like this: 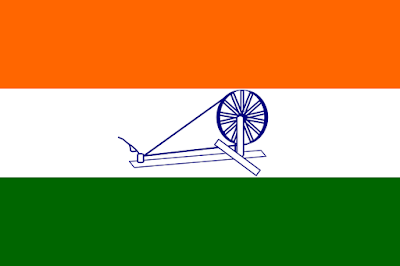 You sort of see the path toward the current flag- at least from a design point of view. Gandhi's first 'draft' only had red and green for Hindus and Muslims- adding the white stripe for all other religions established the tricolor as the design. The spinning wheel was retained from the Gandhian flag to the Swaraj flag... the colors shifted slightly with this flag to avoid sectarian overtones. Saffron was chosen for courage and sacrifice, the white for peace and truth and green for faith and chivalry. When it came time for independence in 1947, the spinning wheel was dropped in favor of the Ashoka Chakra, representing the eternal wheel of law. As for the meaning, I'm going to let Sarvepalli Radhakrishnan- who was India's first Vice-President and it's second President speak for himself on this score:

Bhagwa or the saffron color denotes renunciation or disinterestedness. Our leaders must be indifferent to material gains and dedicate themselves to their work. The white in the center is light, the path of truth to guide our conduct. The green shows our relation to (the) soil, our relation to the plant life here, on which all other life depends. The "Ashoka Chakra" in the center of the white is the wheel of the law of dharma. Truth or satya, dharma or virtue ought to be the controlling principle of those who work under this flag. Again, the wheel denotes motion. There is death in stagnatoin. There is life in movement. India should no more resist change, it must move and go forward. The wheel represents the dynamism of peaceful change.

The flag's name is the Tiranga, or 'tricolor' and was adopted on July 22nd 1947. It was designed by Pingali Venkayya.

And that's the first of our 'Lost Weekends in Vexillology' in the books! I'm going to do some digging to see if I can find an actual BIS certified flag of India somewhere on the interwebs (and more importantly, see how much it costs) to try and get one, because that would be a bad-ass addition to my collection.